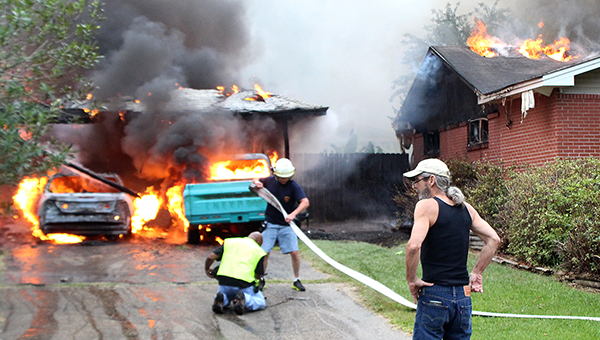 All Greg Strong can do is watch as crews with the Vicksburg Fire Department work to extinguish the fire consuming his 124 Sherwood Drive home. The home at 122 Sherwood Drive was also heavily damaged in the fires. (Tim Reeves | The Vicksburg Post)

One home was destroyed and another nearly so Monday evening in house fires on Sherwood Drive.

Just before 7 p.m., Greg Strong had just sat down to eat dinner when he heard a crackle in the carport of his 124 Sherwood Drive home. When he went outside to check on the sound, all he saw was fire.

All Strong could do then, was run from the house and helplessly watch from across the street.

Next door, the home at 122 Sherwood Drive was severely affected as a fire, ignited by the intense heat of the fire next door and flames lapping against the gable, caused damage to nearly 50 percent of the home.

Vicksburg Fire Chief Craig Danczyk, who was the first to arrive on scene, just six minutes after the 911 calls was received, said when he arrived, portions of the home at 124 Sherwood Drive were already fully-involved.

He said early investigations led officials to believe the fire started as a car fire involving Strong’s 2003 Chevy Impala. It then caught a truck next to it on fire before the blaze took in the carport and the rest of the home.

Danczyk said the first units on the scene worked to prevent further damage to the 122 Sherwood Drive home, as well as trying to knock down the fire on Strong’s home.

Later units that arrived entered 122 Sherwood, where they were able to contain the fire to the bedroom area of the home. He said other portions of the home had water and smoke damage.

Danczyk said no one was injured in the fires, and those living in 122 Sherwood were able to remove many of the valuables from the home. As for Strong, Danczyk said he “unbelievably” was able to recover a few valuables.

In all, four fire companies with rescue, an ambulance and four chief officers responded to the call.

Danczyk said crews cleared the scene at around 9:40 p.m.