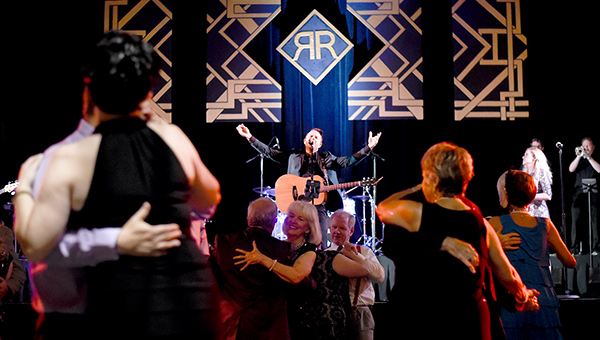 Those six tickets are all that remain of the 600 set aside for the annual Ritz on the River event at the Vicksburg Convention Center, an event that has become one of the most coveted tickets in Vicksburg and Warren County each year.

“We are six tickets away from selling out as of right now,” Annette Kirklin, executive director of the Vicksburg Convention Center, said. “We started off with 600 and only have those six left.”

For Kirklin and her team, the annual program — which marks its sixth anniversary this year — has become a chance to not only support a local charity and put on a great event for the community, but showcase what the facility and staff at the convention center are capable of.

“Each year, we do invite some meeting planners to the event, and because of inviting them to Ritz on the River in past years, we probably have scheduled 12 heavy conventions just from inviting them,” Kirklin said. “What blows them away each time they come to Ritz is the community. And what does my heart good — my cup runneth over — is the diversity of the crowds. It’s everybody between friends and families, everyone coming out to have fun.”

This year, proceeds from the event will go to support the Warrior Bonfire Program, a program founded by Vicksburg resident Dan Fordice.

According to the organization’s website and mission statement, the purpose of their programs “are to encourage camaraderie between those that can fully understand the mindset of a combat wounded soldier and/or their spouse, foster healing through those relationships, inspire growth towards new passions and purpose post military service, or simply know they are not alone.

“Our programs center around hosting retreats that include therapeutic small group communications and activities such as hunting, fishing, skiing and more, with each event concluding with a bonfire.”

Last year, more than $3,000 was raised for Jacob’s Ladder. It was the largest amount raised yet in Ritz’s history. Kirklin expects to raise more than that this year.

Entertainment will include the 12 South Band and performances by Salsa Mississippi during dinner.

Due to the success of the event, and organizers using a different theme each year, Kirklin said her team is “pushed” to come up with something “bigger and better.”

“People keep telling us not to put too much pressure on ourselves to outdo last year, but it’s what we do,” she said. “People don’t want to come to the same thing. You want people to have something fresh and new to come to each year.

“Personally, I don’t want it to get stale. So, so far, so good. We are in our sixth year and still going strong.”

As far as selecting 12 South Band as the main entertainment, supporting the Havana theme of this year’s event, is to find a band that has never played in Vicksburg before.

“We go out and try find a band that is new to the area; someone who has never played here before. We want it to be fresh,” Kirklin said. “(12 South Band) have choreography, costume changes, multiple singers, it’s going to be amazing. They play everything.”

As for the final six tickets, those wanting to purchase one or more can visit Ticketmaster.com or go to the Vicksburg Convention Center’s box office at 1600 Mulberry St.