Power knocked out to Eagle Lake and surrounding areas 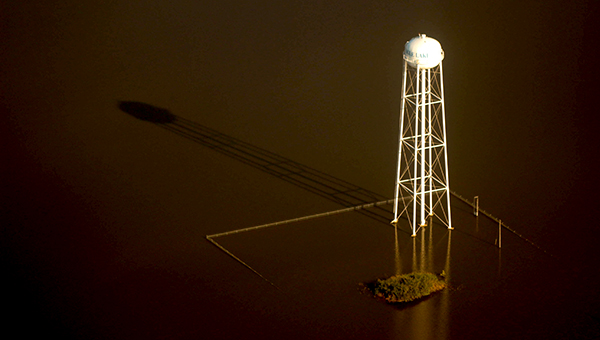 A water tower, located between 465 and Eagle Lake Shore Road, is shown surrounded by water in this aerial photograph taken in June 2019. (Walter Frazier | The Vicksburg Post)

If it wasn’t bad enough for those living in the Eagle Lake area, a round of severe weather Monday morning made things worse.

High winds associated with the line of storms Sunday night and early Monday morning reportedly broke power lines and utlity poles along Low Water Bridge Road in Issaquena County, knocking out power to those living in the Eagle Lake area.

“Most of Eagle Lake, if not all of Eagle Lake, and surrounding areas do not have power as a result of that damage on Low Water Bridge Road,” Warren County Emergency Management Agency director John Elfer said.

In addition to the loss of power, a generator problem at the Eagle Lake Water Plant could lead to an interruption in water service if power cannot be restored. Currently, water is continuing to flow thanks to water stored in the tower.

But when that water is depleted, with no power to pump more water, service would be interrupted.

Elfer said officials with  the Eagle Lake Water District were working to restore the generator at the plant to restore water service.

According to Elfer, power company officials were “trying to come up with a plan on how they were going to restore power to the area.”

Tim Perkins, general manager for Twin County Electrical Power Association, said crews have been surveying the damage, much of which is in flooded areas.

“We have reached out to an electrical contractor who has the ability to work in water areas such as this,” Perkins said, adding the contractor is scheduled to be onsite Tuesday morning. “They will then determine what equipment, capabilities they will need to make the repairs.”

Perkins said the outage occurred about 3 a.m. Monday, about the same time as a line of severe storms rolled through the area.

The high winds also created wave action on the flooded area, resulting in reported damage to one home.

“As far as structural damage, I only know of one house that had a porch come off because of some wave action brought about by the wind,” Elfer said. “And there was a tremendous amount of wind.”

As for security in the Eagle Lake area, access to the area continues to be restricted to residents and those with “legitimate reasons” to be there.

Warren County Sheriff Martin Pace said Eagle Lake is “buttoned up, with deputies staged at the check point at the only way in or out, and deputies patrolling the area by 4-wheel-drive vehicles and by boat.”

“First and foremost, we continue to worry about the safety of those residents who have decided to remain there and then the protection of their property,” Pace said.

Eagle Lake has been under a mandatory evacuation notice since March 8 when water levels in the Yazoo Backwater Area began to rise.

Last week, officials with the U.S. Army Corps of Engineers opened the gates at the Steele Bayou Control Structure, allowing water in the backwater to flow out into the river. Water levels in and around Eagle Lake have slowly started to recede since.

As of Monday afternoon, the level at Steele Bayou Control Structure’s landside was 97.31 feet, while the riverside was at 97.06 feet. At its highest, the level in the lake was in excess of 98 feet.