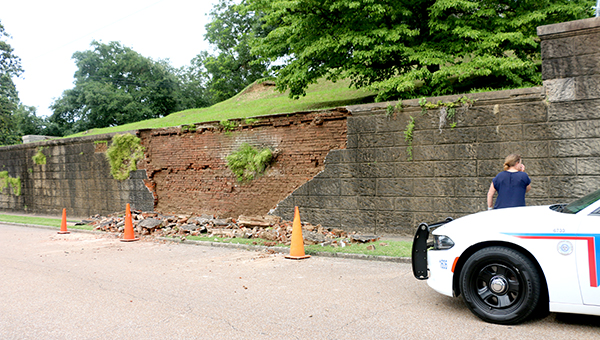 A police car and cones block access to an area near the Old Courthouse Museum Tuesday afternoon where a portion of a retaining wall had collapsed. (Terri Cowart Frazier | The Vicksburg Post)

Crews were called to clear a portion of Monroe Street and a sidewalk after a large section of the retaining wall surrounding the Old Courthouse Museum collapsed Tuesday afternoon.

During a May work session, members of the Warren County Board of Supervisors were presented a report showing the degradation of the exterior wall, which was reportedly caused by years of water seepage.

According to the report, water was allowed to seep into the wall after a French drain, located around the museum wall, had since been covered by grass and landscaping.

Warren County Board of Supervisors President Richard George said Tuesday evening that supervisors would likely hear a report on the damage during their meeting Wednesday. The supervisors had meet Tuesday and were scheduled to meet again Wednesday as they worked to equalize the tax rolls.

“We will obviously hear about the damage and discuss our options Wednesday,” George said. “We had received a report on the damage and were working with experts and the state on developing a play to repair the wall in phases as the need and money were available. We will no doubt need to look to step up those efforts.”

George said the county was looking for funding sources to repair the wall, which included researching any historical grants that might have been available.

He said the report of the wall’s condition was shared with officials with the Mississippi Department of Archives and History, who would have to review and authorize any repairs.