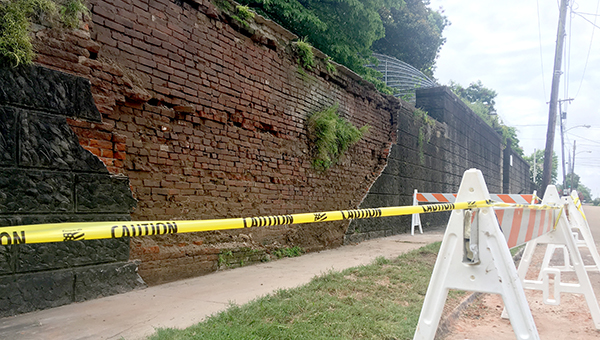 Caution tape and barricades restrict access on a Monroe Street sidewalk near the site of a wall collapse at the site of the Old Courthouse Museum. The fascia of the wall, which covered another brick wall, fell Tuesday evening. (Tim Reeves | The Vicksburg Post)

After a portion of the wall surrounding the Old Courthouse Museum collapsed Tuesday evening, the Warren County Board of Supervisors approved emergency efforts Wednesday to shore up the areas around the collapse and continue efforts to look for funding avenues to pay for needed repairs to the wall.

The section of the wall that collapsed was on the west side of the museum facing Monroe Street. Chuck Thornton, the county’s director of building and grounds, said it was the fascia portion of the wall that fell. While some of the underlying bricks also fell, it appeared that most of the brick wall behind the fascia was stable.

“Right now, our efforts are to stabilize the wall to make sure what is there does not continue to collapse,” Thornton said. “We are also working with the Mississippi Department of Archives and History to determine what work can be done to make additional repairs.”

Earlier this year, the county contracted with George Fore & Associates to do a survey and study of the condition of the surrounding wall. The survey showed problems with the wall, particularly along the west side of the property.

In the report, it was identified that water seeping behind and over the wall had created stability issues.

The study also showed that the water damage might have been made worse by French drains that had been covered.

Because of the building’s history and age, any work on the building must be approved by the Mississippi Department of Archives and History, which has been notified of the collapse.

The study, which included plans and techniques on repairing the issue, was submitted to the state, which approved the plan.

Unfortunately, because of the wall’s age — more than 100 years old — Thornton said the repairs will be expensive.

“When this collapse happened, we were and still are in the process of planning the repairs and determining how much the work would cost,” he said. “We have also been working with Archives and History in seeking any grant money — if there are any out there — that could help pay for it.”

Thornton said the county’s plan is to do the repairs in phases, as money becomes available.

As for the immediate need, he said the focus would be on stabilizing the area, working with the city of Vicksburg and the state to get approval on any temporary repairs.