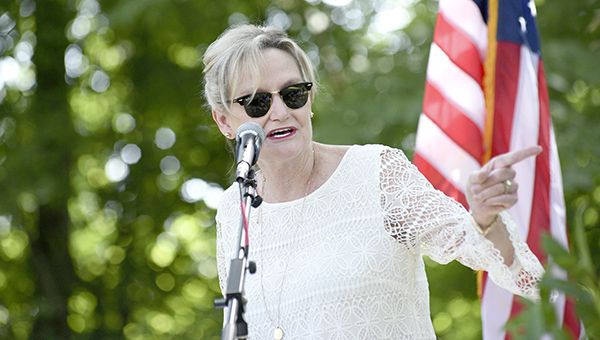 U.S. Sen. Cindy Hyde-Smith said she and her staff are focused on getting the veto that stopped the installation of pumps in the Yazoo Backwater Area overturned. (Courtland Wells | The Vicksburg Post)

By air it looks bad. In person, on the ground, or in a boat, it’s far worse.

For U.S. Sen. Cindy Hyde-Smith, the devastation of the ongoing flood in the Yazoo Backwater Area, in the Delta and along the Mississippi River has been heartbreaking, and working through the governmental process to get something done about the flooding has been tedious.

“It is total devastation,” she said just days after an unannounced visit to flood areas last week. “It’s awful, especially to those who have been displaced from their homes, the farmers who have such uncertainty each day about what tomorrow will bring. Five months of this is a lot of pure anguish.

“And, you look at the faces of those people and it is just total emotional, physical, psychological stress they are going through,” she said. “And for good reason of course.”

In her maiden speech on the floor of the U.S. Senate on May 9, Hyde-Smith called on the federal government to act. Since that time, she said her focus has been both finding an immediate solution to the ongoing flood and a long-term solution in hopes such an event ever happens again.

Hyde-Smith said she has held a number of meetings with officials with the U.S. Army Corps of Engineers and the Environmental Protection Agency to determine just how a veto — placed in 2009 — preventing the placement of high-capacity pumps in the Backwater Area could be overturned.

“Those at the EPA have told us that a veto has never been overturned, so we are looking into just how such a process could even be done, legally,” Hyde-Smith said. “Then if, when that veto is overturned, we have to find ways to make sure the pumps are paid for and installed.”

She said even though Congress approved the project and appropriated funds in the past, the cost of completing the project would be far more expensive today, and would still be two-to-three years away from completion.

She said national emergency funds could be used to fund the installation of the pumps, but — if given the approval to use those funds — the amount available is not known.

“We are going to take this one step at a time, taking very careful steps,” Hyde-Smith said. “Because we don’t want to find ourselves in the position where the veto is lifted and then wonder where we are going to find the money.”

As to where the lifting of the veto stands, the EPA, in response to questions from The Post, did not provide specifics.

“The EPA strongly supports the goals of improved flood protection and wetland protection for the residents of the Mississippi Delta,” the agency said in an emailed response. “The EPA will continue to work with the Corps and the local Levee Board to review updated data and other information as it relates to our regulatory programs and oversight.

The agency did confirm no agency veto has been overturned.

Still, Hyde-Smith said she and her staff are focused on getting it overturned.