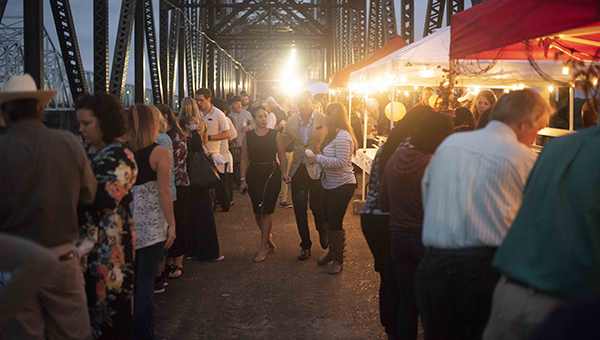 The second annual Supper on the 'Sip will be Thursday, Sept. 26. (Courtland Wells | The Vicksburg Post)

The official name is long, but not nearly as long as the line of those likely seeking tickets to the 2019 Supper on the ‘Sip.

Tickets for the second annual event, officially titled the “Dine and Stroll the Old Mississippi River Bridge: Supper on the ‘Sip,” were set to go on sale at midnight Thursday.

Supper on the ‘Sip is scheduled for Thursday, Sept. 26.

United Way of West Central Mississippi officials said they were ready for what was expected to be a rush of those seeking tickets. The event has in one year has become a “must-attend” in Vicksburg.

But thanks to some presales from those who are Leadership-level sponsors of the United Way of West Central Mississippi’s annual campaign, only 550 tickets remain.

May said even though those wanting to attend the event can purchase tickets at the United Way’s office at 920 South St., using the website eventbrite.com and searching for “Dine and Stroll: Supper on the ‘Sip” is the easiest route.

Tickets are $35 each and there is a limit of 10 tickets per person using the website. If groups or businesses would like to purchase more than 10 tickets at one time, then they need to contact May or visit the United Way’s office.

In addition to more tickets, and as a result more guests, May said organizers are also hoping for five-to-10 more restaurants participating.

“Last year, we had 15 restaurants take part, and it was fantastic,” she said. “We have sent out restaurant packets already, and received a number of verbal commitments, but nothing official just yet. We do expect, though, based on the success of last year’s inaugural event, to have more restaurants taking part.”

The event, which allows guests to stroll up and down the Old Mississippi River Bridge sampling food from each of the vendors, is more than just a great social event.

“In addition to a great time, this event does mark the kickoff to our annual campaign,” May said. “It is just one of the events — events we have throughout the year — that goes to raise awareness of our partner agencies and their programs, and raise funds to help support their efforts.”

Proceeds from Supper on the ‘Sip are part of the United Way’s annual campaign.

There are also two other changes to this year’s event, brought about by requests by the Warren County Bridge Commission, the group that oversees the bridge.

The first is guests will need to be 15 years old or older to attend. And, the commission is requiring a clear bag policy, meaning no purses or bags will be allowed unless they are clear.

“This policy will be enforced by security at the gate,” May said. “But we do have clear bags with the United Way logo for sale at the United Way now for $10.”

For information Supper on the ‘Sip, or any other of the United Way of West Central Mississippi’s programs, call 601-636-1733.