Supper on the ‘Sip sells out in just hours 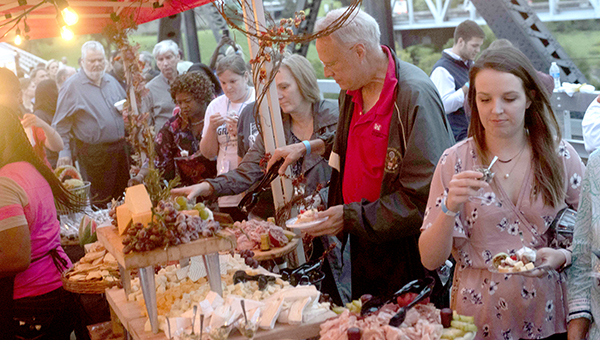 Attendees line up to serve themselves food from the Ameristar Casino booth during the United Way's inaugural Supper on The 'Sip last September. (Courtland Wells/The Vicksburg Post)

Well, that was quick.

Less than 14 hours after tickets went on sale for the second annual Dine and Stroll on the Old Mississippi River Bridge: Supper on the ‘Sip, they were gone.

“When I was talking to the lady who purchased the last ticket, she told me that it didn’t matter how many tickets we would have made available, we would still have sold out,” Kami May, director of marketing for the United Way of West Central Mississippi, said. “We are blown away. I thought we would sell out, but nothing like this.”

May said a waiting list is now being compiled of those who try to log on to the Eventbrite site or call the United Way office to purchase tickets.

“This is absolutely unbelievable,” United Way of West Central Mississippi Executive Director Michele Connelly said. “The amount of support in this community that we have to further United Way’s mission is heartwarming and appreciated by not only United Way but also our 19 partner agencies.”

While the event is currently sold out, there is a chance more tickets will be made available, but that depends on the number of restaurants and businesses who sign up to participate in the Sept. 26 event.

“If we surpass our goal of 25 restaurants, then there is a chance we can make more tickets available,” May said. “But that all depends on the number of restaurants.”

She said that while restaurant packets have been delivered to area businesses, no one has signed up … yet.

“We do have an Aug. 12 deadline for restaurants and businesses to come on board,” May said. “We know there are a number of restaurants who have given verbal commitments to take part, but nothing in writing yet.”

The Supper on the ‘Sip event is the kickoff for the United Way’s annual fundraising campaign, which goes to support programs throughout the United Way of West Central Mississippi’s coverage area.

For more information on the United Way, partner agencies and the programs they support, call 601-636-1733.