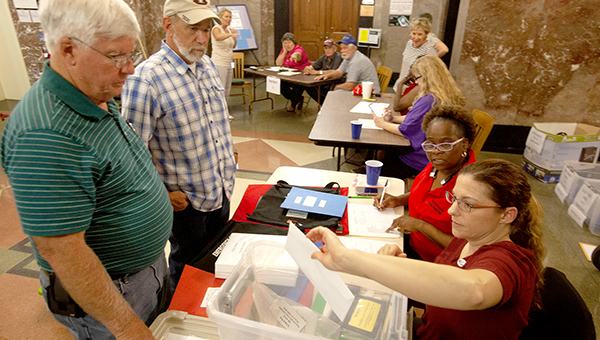 The Warren County Election Commission is seeking poll workers for November's general election. The commission said they are short of the number they need due to concerns about the COVID-19 virus. (Courtland Wells/The Vicksburg Post, file photo)

While the turnout was low Tuesday in the state and county primaries, at least one incumbent member of the Warren County Board of Supervisors has been voted out and another incumbent is likely being pushed to a runoff.

In the race for the Republican nomination for Warren County Board of Supervisors District 4, John Carlisle’s re-election bid came to an end as Marty Crevitt won the primary race.

In unofficial results, Crevitt claimed 61 percent of the vote, compared to Carlisle’s 38.7 percent. Before absentee votes were counted, Crevitt held a 219-vote lead.

“My main thing, is that I want to make sure my family, my friends and all the business owners who supported me, know how much I appreciate them for their hard work and their support,” Crevitt said. “I will never forget this experience. My promise to everyone who supported me, to all the voters of District 4, is that I will not let them down, and will work hard every day to make Warren County better.”

With his party nomination victory Tuesday, Crevitt will now take on Dr. Jeff Holland in the general election Nov. 5.

“I got the chance to see Dr. Holland today and shake hands. We both wished each other good luck and he told me, ‘I’ll be seeing you soon,’” Crevitt said. “I replied, ‘I hope so.’ And then we both laughed. That’s the kind of candidate I want to run against.”

As for Carlisle, he said he was disappointed but appreciative of the hard work by his supporters.

“We tried,” Carlisle said. “Pat (his wife) and our friends worked hard. We went around to every house. The people wanted change.”

As for his political future, Carlisle said he has no plans to run again.

Carlisle said he did not know which candidate he would support in the general election.

As for the Democratic nomination for Warren County Board of Supervisors District 3, it appears the race is headed to an Aug. 27 runoff election.

Without absentee vote totals recorded, incumbent Charles Selmon trailed Shawn Jackson by 11 votes. Neither candidate claimed a majority of the 888 votes cast, which means both will face off in the runoff in three weeks.

Vicksburg Warren School District Trustee James Stirgus Jr. finished third in the race with 23.54 percent of the vote and will not advance to the runoff.

The winner of the runoff will face David Sharp, an independent, in November’s general election.

After a clear win Tuesday night for the Republican nomination in Warren County Board of Supervisors District 1 race, Edward Herring has set up a rematch with incumbent Supervisor John Arnold.

Four years ago, the two were part of a three-candidate race in the general election, with Arnold winning.

“I was within a stone’s throw of beating him four years ago. Now it’s just the two of us,” Herring said. “Today has been a long day, but a refreshing day. I know the turnout was low, but those who did turn out supported us.”

Herring, who said he would enjoy Tuesday’s party nomination victory for the evening, said the race starts all over again Wednesday.

“Going to reenergize and then start all over tomorrow,” he said. “Anyone and everyone we met during the primary, we are going to go out and meet again.”