Police: No truth to social media claims of Walmart threats 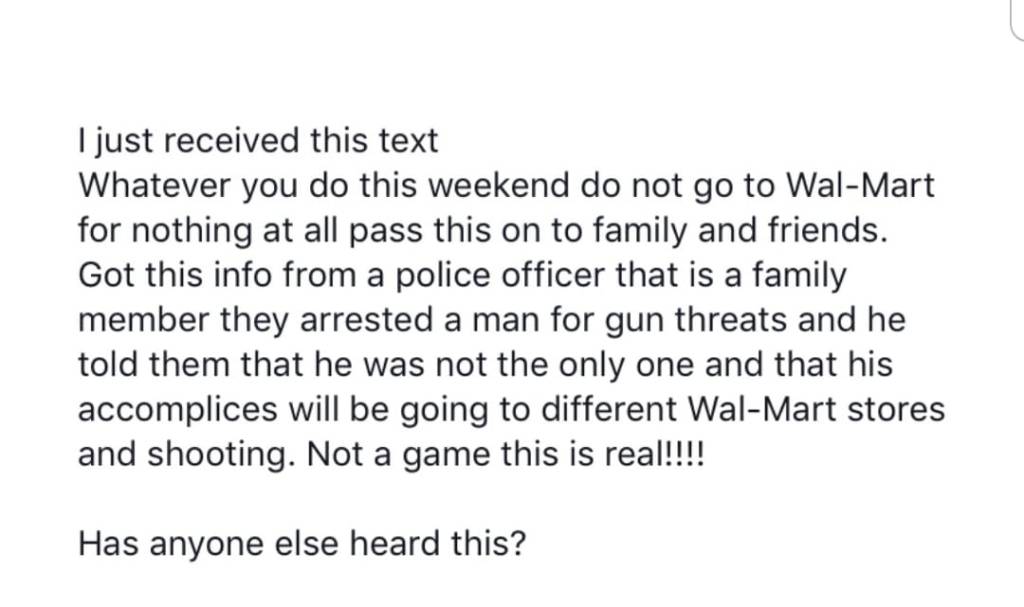 This is a screenshot of the text message received by The Vicksburg Police Department. The photo was taken from their Facebook page.

A photo at the top of this article shows the contents of the rumor circulating in Vicksburg, claiming a person that was threatening gun violence at Walmart this weekend had been arrested.

Police officials said they have not made arrests and have no knowledge of alleged threats made against the Vicksburg Walmart.

Vicksburg Police Chief Milton Moore confirmed the same late Friday morning. The VPD does not know where the posts originated but confirmed they are circulating in areas around the state.

“When someone just posts something like this, it is very hard to determine where it came from,” Moore said.

Even though the claim is unfounded, Moore said the VPD will patrol Walmart over the weekend to ensure those visiting the store are safe. He also encourages anyone who has information about where the posts originated to call 911 or the police department directly at 601-636-2511.

Natchez Chief of Police Walter Armstrong, who is a former Vicksburg police chief, also said the rumors are unfounded.

“That is absolutely not true,” Armstrong said. “We have not gotten any calls about Walmart except for shoplifters, and we have absolutely no knowledge of this.”

The social media post that circulated in the Natchez community said: “I’ve gotten word that Natchez PD have arrested a man who was planning on shooting up Natchez Walmart THIS WEEKEND!! The man has made a statement that he was not planning this attack alone! Natchez PD are currently looking for the other suspect. I do not know how true these statements are, but it’s best not to play around or ignore something so serious especially how corrupt the world is today!! Please stay out of Walmart‼️‼️This is not a joke”

Armstrong said the Natchez Police Department is also working to find out where the post originated.

The social media posts might have been inspired by several recent incidents at Walmarts around the country. On July 30, two employees were killed by another former employee at a Walmart in Southaven. The suspect, Martez Tarrell Abram, was shot by police but survived and was taken into custody.

On Aug. 3, 22 people were killed and 24 injured by a gunman at a Walmart in El Paso, Texas. The suspect, Patrick Crusius, was arrested shortly afterward and faces capital murder charges in Texas.

On Aug. 6, an altercation between customers at a Walmart in Baton Rouge sparked reports of another shooting that were later disproven by surveillance footage and further police investigation.