Officials testify before senate committees on impact of historic flood 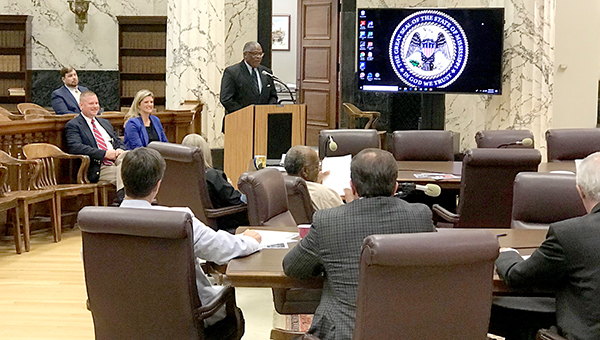 The size and scope of the disaster left behind by the historic Yazoo Backwater Area flood is only now being realized as the cleanup begins.

Now, after the floodwaters from the nearly six-month flood have receded, state lawmakers are searching for information and looking for ways to help in the recovery.

Two state Senate committees held joint hearings Wednesday and Thursday to hear testimony from elected and community leaders from those areas affected by the flood, state agencies that responded to the disaster and organizations rallying support to help those individuals, businesses and farmers devastated by the flood.

Elfer said his testimony, and the testimony of others, was an effort to keep the topic of the backwater pumps in front of lawmakers and key decision-makers.

“I understand the need for mitigation. Elevating houses, I get it. Elevating roadways, I get it,” Elfer said. “But the key component to any future mitigation must be the pumps, and I hope the powers that be can help the Corps of Engineers finish the pumps project.”

Elfer believes if the pumps had been installed and available to help battle this flood, they would have cut the number of flooded acres in half.

He also said he and others worry that now that floodwaters have receded, that there might be less attention paid to the ongoing disaster.

In addition to the pumps, Elfer said the state needs to evaluate better temporary housing options for those impacted the by flood.

Flaggs, who spent a career in the Mississippi Legislature, called on the state to find ways to fill the gap of what residents forced to evacuate and live away from their home for months receive from state and federal agencies in the way of temporary housing assistance.

His testimony also included economic impact figures, mainly dealing with areas in the Kings Community, that were affected by long-term flooding from the Mississippi River.

Flooding, Flaggs testified, threatened the public safety of those visitors loading and offloading visiting riverboats, forcing the rerouting of commercial traffic in an around downtown, and reducing the public’s ability to use the city’s riverfront.

He also said the city spent more than $377,000 in additional police overtime providing extra patrols in the flooded areas of the Kings Community.

In her testimony, Strickland said that although overall hospitality revenue for the VCVB is up more than 9 percent so far this year, May and June restaurant and lodging tax collections were down.

As for hotel revenue, reports showed May-July 2019 was off more than 8 percent from the prior year.

She also said perceptions by those outside of the Vicksburg and Warren County area were that many of the attractions and tourist areas in and around the area had been flooded, which led to a number of cancellations.