The right way to make, enjoy a Coke float 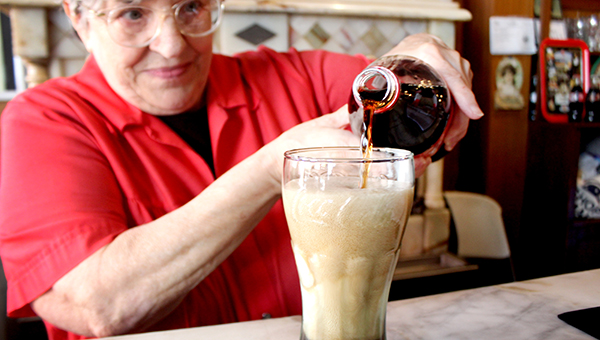 Donna Boone puts the finishing touches on a Coke float at the Biedenharn Coca-Cola Museum. (Tim Reeves | The Vicksburg Post)

The Biedenharn Coca-Cola Museum is a world of wonder and fascination for anyone who loves history, especially those historians who have an appreciation for the fizz, bubbles and taste of a Coca-Cola.

Then there’s the soda fountain. While no longer operational, the large, ornate piece of candy store history is in itself a wonder. Metal plates under each fountain document which flavor is available, even one labeled “Don’t Care.”

But while the soda fountain is no longer operational, visitors to the museum — between 22,000 and 32,000 annually — can still order a fresh Coca-Cola. They can also enjoy a sweet treat that itself has become a fan favorite.

“My goodness, there was one Saturday when some of the boats were in, that I think we served about 200 or so of them,” Donna Boone, who works at the museum, said.

What Boone served was a Coke float, a cold, refreshing treat that many themselves have made at home. Drinking and eating it in the Biedenharn Coca-Cola Museum makes it even better.

“I remember that Saturday pretty well,” Boone said, adding she was filling in for a co-worker. “Some of those who were visiting from the boats said they advertised getting a Coke float here. And, a lot of them came.

“It seemed like that was all we did that day was make one float after another.”

When the first bottle of Coca-Cola was bottled, Joe Biedenharn did it in Vicksburg in 1894 in what was then Biedenharn Candy Company. It would be hard to imagine that 125 years later, Coca-Cola’s would still be served in the same building, but this time, one of the most popular items would be Coke floats.

Today, the building and museum are owned and operated by the Vicksburg Foundation for Historic Preservation, a not-for-profit organization founded in 1958 and dedicated to the preservation and interpretation of Vicksburg’s architectural heritage.

The museum’s memorabilia and displays have been years in the making and collecting, even with some help from the Coca-Cola Company itself.

Nancy Bell, chairperson of the Vicksburg Foundation for Historic Preservation, said the museum sees thousands of visitors each year, and the increase in the number of visitors by riverboats has made an impact on attendance.

“Thank goodness for the boats,” Bell said. “That has really made a difference to us, and others downtown.”

Bell said the number of visitors to the museum peaks May through August and then tapers down. They see spikes in March and April as well.

The secret to a great Coke float

What could be so secret about making a Coke float? It’s just Coke and vanilla ice cream, isn’t it?

Yes, but according to Bell, there is a science to it.

“First, we take the glass and pour a little bit of Coke in it. Then, we put the ice cream in. You have to kill some of the bubbles first. If not, it might just bubble right over,” she said. “Then we finish pouring Coke in.

“The best Coke float has those bubbles, and the head on top. We then put a straw and a spoon in it to finish it off.”

Bell said that while the most popular Coke float sold includes vanilla ice cream, guests can choose a number of flavors, including mint chocolate chip, chocolate, butter pecan and more.

“A lot of people ask for cherry cheesecake ice cream because they said it tastes like a Cherry Coke,” Boone said. “But the most popular is vanilla.”

While all the flavors have their followings, when being used in a float, there’s one flavor that Boone and Bell have advised guests to avoid.

“We had a guest one time who asked for orange sherbet,” Bell said. “We only have that flavor every so often, because, honestly, I like it. But he asked for it and we made it. After a bit, he came back and said, ‘Don’t let anyone else put orange sherbet in their float.’”

Boone said he was very nice about the whole thing, and admitted that he asked for it.

“You could see him sitting there drinking it. I think he thought it was OK at first,” Boone said. “He finished it off and then told us not to let others do it.”