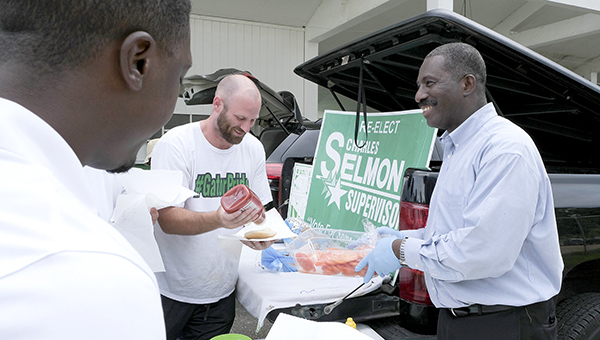 For more than 20 years, Charles Selmon has served District 3 on the Warren County Board of Supervisors, and it is that experience, that tenure of service, he believes is a reason why voters should support his re-election effort.

Selmon will face challenger Shawn Jackson in a runoff election Tuesday for the Democratic nomination for District 3 supervisor. The winner will face David Sharp, an independent, in the November general election.

In addition to his experience and relationships built over his years in office, Selmon said his focus on workforce development over the years and his commitment to continued development and its impact on overall economic development, is another factor voters should consider.

He said the investment supervisors made last year in workforce development in offering assistance through the WIN Job Center has made a difference in improving the overall readiness for workers in Warren County. And it is those investments he wants the board of supervisors to continue.

As part of his focus on economic development, Selmon said solving new home construction and affordable housing issues in Warren County will be a focus in his next term.

“We have a problem in the way of housing that we need to address that will allow our community to grow,” he said. “One of the main initiatives for my next term is to focus on more housing, housing people can afford, so they can move to Vicksburg. The goal is to have people live in Vicksburg and Warren County.

“That’s another way of economic development. It’s not just bringing jobs here. These workers need to have somewhere to live, and their families need somewhere to play.”

He added improving housing and finding ways to attract more people to move to Vicksburg will help a number of areas.

“Our population has to increase. We cannot survive just being small town Vicksburg. We’ve got to grow the population so that we can get some of the main attractions,” Selmon said. “In order for our community to have some of the name brand restaurants and businesses and attract some of the high-paying, high-tech companies, we’ve got to focus in on our community’s quality of life.

“Which means in this case we need to have more people living in Vicksburg. There’s less than 30,000 people, and we have a median income in Vicksburg that is not that high.”

Even as Selmon looks back on many of the accomplishments in his service thus far, he said this campaign is about Warren County’s future.

“We constantly have to grow and prepare for the future. Our accomplishments in the past are not going to be sufficient for the future,” he said. “I am not just talking about the next four years, I am talking about preparing for the next 20 years. I want to put things in place that we will be set to grow next 20 years so someone’s grandchildren can benefit from the things we are doing today.”

The Warren County Board of Supervisors needs to be more creative in increasing the county’s revenue stream and improving its... read more