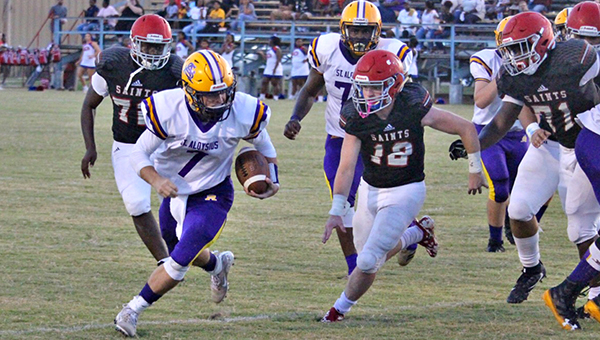 GREENVILLE — A brief power outage caused a delay at the start of Friday’s game between Greenville Christian and St. Aloysius, but it did little to short-circuit St. Al’s powerful ground game.

The Flashes only attempted four passes, ran for more than 300 yards, and beat Greenville Christian 21-19 to end a nine-game losing streak in games played in August. It was St. Al’s first win in the opening weeks of the season since 2014.

Alvin Brown finished with 214 yards and two touchdowns on 19 carries, while quarterback Phillip Upshaw rushed for 134 yards on 26 carries. Brown was also taking snaps at quarterback on Friday.

“For two weeks in a row, our kids have played hard from whistle-to-whistle,” St. Al head coach Michael Fields said. “That said, there are still so many fundamental things we need to improve on, which just tells me that we can be so much better.”

On the night, St. Al was 1-for-4 passing, for four yards, one touchdown and an interception that was returned for a touchdown. The Flashes did not attempt a pass in the second half, wisely relying on the run to control the game.

With 2:47 left in the third quarter, Brown finished off a long drive with an 8-yard touchdown run. Kieran Theriot added the extra point to give St. Al a 21-12 lead.
What looked like a done deal turned into anything but, when St. Al fumbled deep in Greenville’s territory with just 1:30 left in the game.

“I was thinking there was two minutes left, we were up by two scores, so we went ahead and put in the second group, to give them some experience,” Fields said. “Even if they were to score, they would still need another score. Never did I think we would fumble the ball away and let them score so quickly.”

Thankfully for the Flashes, Brown and Upshaw continued their strong running attack to remove any doubt.

With just 1:26 remaining, and having the ball deep in their own territory, Brown ripped off a 63-yard run that flipped the field and allowed the Flashes to leave with the win.

With the win, St. Al evened its record at 1-1 and will return home next Friday to play Central Hinds in its District 3-5A opener. Greenville Christian fell to 0-2 on the year.

“Last year, we finished the season strong. We want to start off strong this year and get even better at the end,” Fields said.

Greenville Christian got on the board first, attacking St. Al through the air, with Mohead leading the charge. With 7:18 to go in the first quarter, Mohead found Stokes for a touchdown and a 6-0 lead.

Brown capped off an 80-yard drive drive for St. Al with a 3-yard touchdown run. The score, along with the extra point by Theriot, gave the Flashes a 7-6 lead with 2:14 left in the opening quarter.