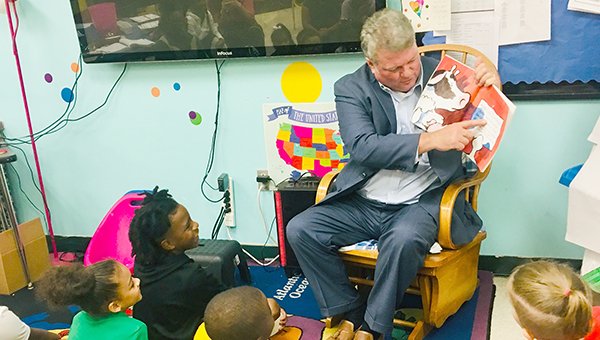 For a 4-year-old, pre-K student at Dana Road Elementary School, they might not know who Attorney General Jim Hood is, the office he holds or the office he is seeking, but for Jim Hood, the students he met Monday are among the very reasons he is running for governor.

During his visit, Hood had the chance to interact with students in two pre-K classes, discussing curriculum with teachers and how the Vicksburg Warren School District was able to expand pre-K to nearly every elementary school in the district.

“I am proud of this district for going above and beyond what other counties’ systems have done by really expanding early childhood education, where others have not,” Hood said as he went from one classroom to the next, asking questions and meeting students. “I have asked questions of the teachers and administrators and learned how they have implemented those things and it has created a better environment and better test scores.”

Currently, there are 17 pre-K classes spread across nine of the 10 elementary schools in the district. The lone elementary school without a pre-K program is Bowmar Elementary, which is due to lack of space.

“Economists now agree the best investment a state can make is in early childhood education for economic development purposes of all things because you have a much better-trained workforce,” Hood said. “I wanted to come to a school and see where the students are at six weeks and have been amazed.”

A key part of Hood’s campaign platform is investing more in pre-K programs and providing what has been built in Warren County to other districts across the state.

“I wanted to speak with the teachers and administrators about what if we expanded this statewide, that’s what I am advocating, to make (pre-K) available throughout the state,” he said. “I wanted to see how they deal with the size of the classes, do they have enough classrooms, to see how it will affect schools and districts when we roll this out.”

That investment, Hood said, would reach every 4-year-old not already served by an existing pre-K program.

Hood also had the chance to review some of the technology being used by teachers and students in the district, including Chromebooks and smart boards teachers use in the classroom.

In a visit with Kayla Slack’s second-grade class, Hood took the time to read the book “Duck for President” by Doreen Cronin. In return the students had the chance to ask a few questions, and share with them a few of their favorite, “why did the cow cross the road?” jokes.

As for his interaction with students Monday, he said he takes away the social skills the students showed.