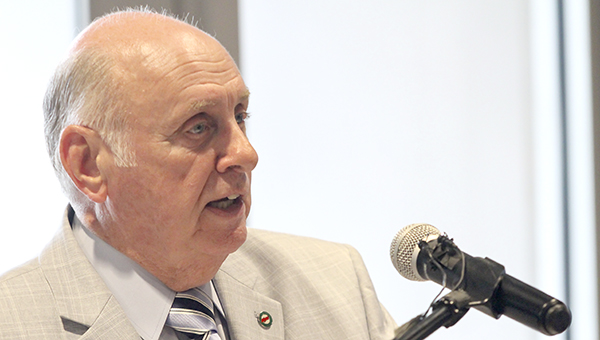 More than a decade after joining the Vicksburg Warren School District’s Board of Trustees, Joe Loviza has resigned.

The resignation ends Loviza’s service to public education in the Vicksburg and Warren County area that began in 1963, when Loviza began teaching at Cooper High School.

Loviza, 79, made his announcement during Tuesday’s trustees’ meeting. His current, six-year term on the board expires December 2020. He was first elected to the board in November 2008.

“Working with Mr. Loviza has been a blessing. He is a great friend that was instrumental in helping me and my family get acclimated to being Vicksburgers. He has been a great trustee,” Vicksburg Warren School District Superintendent Chad Shealy said. “The Vicksburg Warren School District has benefitted from his many years of service beginning 56 years ago. He is a fantastic example of what being from Vicksburg is all about because he has spent most of his life serving others.”

In a statement during Tuesday’s meeting, Loviza said the decision was because he had recently moved into a district other than the one he represents on the board. Loviza represented District 4 on the Board of Trustees.

“Under the rules, I must resign. I don’t want to resign, but I must resign,” Loviza said. After his resignation, which was effective immediately, he got up, stepped away from the table and left the meeting.

Loviza said the decision to resign came after he asked board attorney Briggs Hopson to check with the Attorney General’s office. After getting the feedback from the AG’s office, and after discussing the issue with both Hopson and Shealy, Loviza made the decision to step down.

After Loviza’s departure, the board elected Sally Bullard as vice president of the board, a position Loviza held. Board president James Stirgus Jr. was absent from Tuesday’s meeting, attending a conference in Nashville.

The trustees now have 30 days to fill the vacancy on the board. According to district officials, board members will nominate an individual, who must live in District 4, at either the Tuesday, Oct. 8 meeting or the Monday, Oct. 21 meeting. At that meeting, the board will then decide among those nominated.

The person selected by the board will serve the remainder of Loviza’s term, which expires in December 2020.

Loviza is a graduate of St. Aloysius High School and a Navy veteran.

He earned five decorations for his military service, including the Meritorious Service Award.

In 1973, Loviza was appointed director and dean of Hinds Community College Vicksburg Campus. He retired from that post in 1993, when he ran and was elected mayor in Vicksburg.

After his term as mayor ended in 1997, Loviza returned to the Vicksburg Warren School District for four more years.

During his time at Hinds, he helped start the school’s vocational tech center and the Consortium of Higher Education. He was an adjunct teacher at Mississippi State and is in Who’s Who of American Education and Personalities of the South.

He has had leadership roles in the Lions Club, Vicksburg Warren County Historical Society, Delta Council, Mississippi Municipal Association, Central Mississippi Planning and Development District and Vicksburg Parks and Recreation Commission. He is chairman of TRIAD and secretary of the Vicksburg National Military Park Guides Association.

He is on the Old Court House Museum and Warren County Recreation Commission boards.

In September 2014, Hinds Community College honored Loviza, calling him “the godfather of vocational education” as they named the school’s multipurpose building on the Vicksburg campus in his honor.

“You might call Mr. Loviza the godfather of vocational education in our community,” said Robert Pickett, the president of the Hinds Community College Board of Trustees, said at the time.

Loviza was the Vicksburg-Warren campus’ first employee when it opened 40 years ago, said Dr. Clyde Muse, president of the community college, during the dedication ceremony.

The local campus was the first facility to offer vocational and technical training to highs school students, said Muse.

“This unit continues to be one of the largest career and technical programs for high school students in the state of Mississippi. That kind of effort does not just happen. It takes a lot of hard work on the part of this community,” Muse said of Loviza’s contribution to community college education.