Kings Point Ferry back on the water after engine replaced 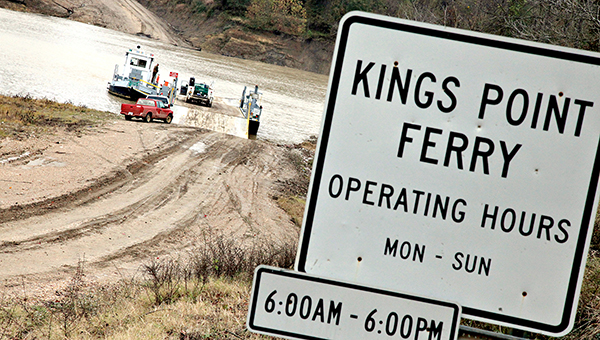 ­After being out of service for about six months, the Kings Point Ferry is back on the water.

It is the only public access to the Kings Point area since construction of the Yazoo Diversion Canal in 1903 cut it off from the mainland of Warren County.

Kings Point is an island made up mostly of hunting camps and timber farming. The ferry runs daily carrying hunters and workers across the canal. Its busiest periods are deer and turkey seasons, and the peak fishing time.

The ferry had been moored along North Washington Street since February because of the Mississippi River flood. But when county road employees prepared to move it back to its landing after the flood, George said, one of the ferry’s two engines went out.

“The engine was running fine (before the ferry was moored),” he said. “It’s just the nature of mechanics; anything mechanical, at some point, it gives up. It sat idle for three months; you run it for three days and it’ll blow up. That, in effect, is what happened.”

The engine, George said, “could not be economically repaired,” forcing the county to replace it.

“We needed at the same to upgrade the engine because parts were not readily available,” he said.

George said the county was able to get a new engine, but the mechanic who was supposed to install it, “had a few difficulties in logistics, and we lost time — normally, it wouldn’t have taken so long.”

He said the ferry is operating with the new engine and an existing engine, adding another new engine has been ordered in case the older engine fails or the county has time to for maintenance that will allow workers to replace it.

“The idea is to eliminate, if possible, time lost,” he said. “If we were to have some sort of trouble, we could deal with it immediately.”