Riverwalk to again host ‘Bras Along the Bridge’ 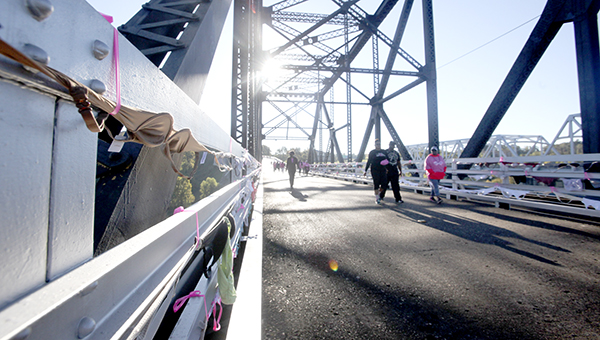 Riverwalk Casino Hotel is once again hoping to string bras along the Old Mississippi River Bridge in an effort to raise money for the American Cancer Society and in recognition of October being Breast Cancer Awareness Month.

This marks the 12th year Riverwalk will organize “Bras Along the Bridge.”

“It is something that we’re excited about every year,” Riverwalk Casino General Manager Ginny Tzotzolas said. “It is a way to really get the community engaged and involved with the fundraising process in a very creative way.”

During the month of October, Riverwalk will collect bras, and for every bra donated, the casino will donate $1 to the American Cancer Society.

In its first year, the campaign brought in just over 1,000 bras. Last year, more than 11,000 were donated, with $11,612 being raised for breast cancer awareness and cancer research.

At the end of the month, Riverwalk team members, and members of the Warren County Bridge Commission will string the donated bras across the bridge.

A walk will be held Saturday, Nov. 2 from 9 a.m. to 11 a.m. Breast cancer survivors and members of the community are invited to walk the bridge and view the bras. At 10 a.m., Riverwalk will present a check to the American Cancer Society.

Since the mid-1970s, the breast cancer survival rate has increased from 75 percent to 90 percent.

The cutoff date for dropping off bras is Oct. 31.