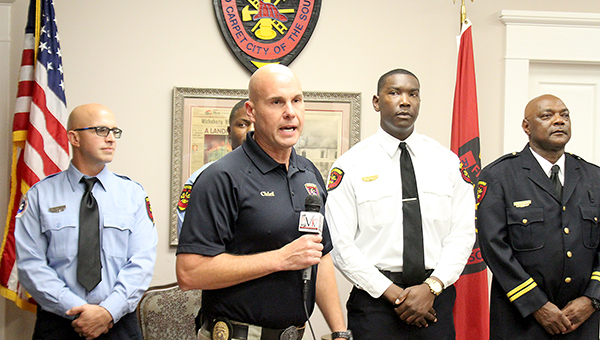 From those with three years of experience with the Vicksburg Fire Department to those with nearly three decades of experience, four members of the department received new ranks Wednesday during a promotion ceremony at Central Fire Station.

In a ceremony attended by city officials, fellow firefighters, guests and family, the department welcomed two new lieutenants, a captain and an assistant fire chief.

“Today is a celebration,” Vicksburg Fire Chief Craig Danczyk said. “We are promoting four very deserving individuals who all have made a tremendous impact with the city of Vicksburg and the Vicksburg Fire Department. The promotion process is very competitive, very grueling. Everybody wants to do their best, and these four individuals have done their best.

“They’re the top of the list. They’re the cream of the crop,” he said. “We are excited for the fire department, excited for the leadership these gentlemen will provide us and appreciative of the work they have already done for the city.”

One of those promoted Wednesday was Carl Carson, who advanced from captain to assistant fire chief.

Carson joined the department in 1990 and will take command of A-shift, which oversees 36 employees. The A-shift commander works out of the Central Fire Station and manages all seven stations during a 24-hour shift. He is filling the vacancy left open by the retirement of Asst. Chief Darrell Flaggs, who was a 33-year veteran of the department.

Former Lt. Julian Tolliver, who joined the department in 2008, was promoted to captain and will continue to serve B-shift.

Tolliver is also a paramedic and will continue to serve the shift in a dual role as an officer and paramedic. He will work out of the Central Fire Station and will supervise Engine 6. He is filling the vacancy left open by Capt. Clarence Maxey, who retired after 24 years of service.

Jabaris McDaniel, who finished first in the lieutenant’s test out of 21 applicants, was promoted to lieutenant.

McDaniel joined the department in 2016 and, in addition to serving as a firefighter, recently completed the paramedic course at Hinds Community College.

McDaniel will serve dual roles with the department, serving as second officer on an engine company with B-shift and as a paramedic.

Daniel Moulder, part of the department since 2015, was also promoted to lieutenant Wednesday.

North Ward Alderman Michael Mayfield said the quality of those individuals being pinned Wednesday is a credit to the department and its personnel.

“Anytime you can come through the ranks and work your way up, that is saying a lot about you as an individual and it is saying a lot about the people you work with and the people that you work around,” Mayfield said. “I ask you guys to work together, as y’all have done to this point, and to care about one another. You never ever know who you will have to call on when you leave this station or any of the other stations. You want to know that you have that person’s back and they have your back. I believe we have that here in the Vicksburg Fire Department. We appreciate what you do on a daily basis, 24 hours at a time, that is a blessing in itself.”

Mayor George Flaggs Jr. added his thanks to the families of those who serve with the department and said those who serve as first responders deserve credit for what they do for the community.

“I tell everybody, don’t call me “Honorable George Flaggs,” you are the ones who are honorable, police officers, first responders, you are the ones who should be held in honor,” Flaggs said. “As for the families, we thank you for your sacrifice, because we know it’s a sacrifice for them to leave you at times and not know if they are going to return or not. I know those calls. We thank you for that and we don’t want you to think that it goes unnoticed.”