Agreement reached in 2014 to fund water tank repairs not fulfilled 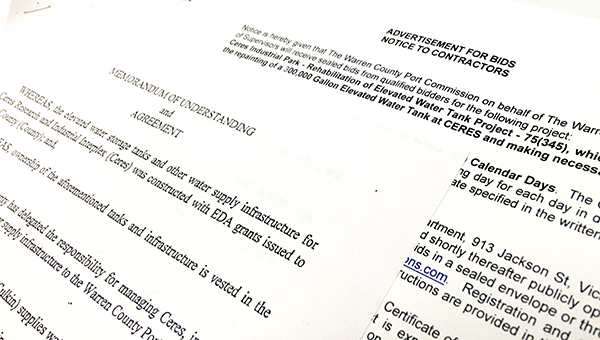 The working relationship between the Warren County Board of Supervisors and the Warren County Port Commission is one that is designed to best manage the county’s assets in the Port of Vicksburg and the Ceres Industrial Park.

It is that relationship that appears to have been strained recently when supervisors decided to add $300,000 in expense to the commission’s budget to make repairs to the 300,000-gallon water tank at the Ceres Industrial Park.

During the budgeting process, which The Post reported on in September, port officials were caught off guard when supervisors added the $300,000 expense to the port’s budget to pay for the tank’s restoration.

The funds being used for the tank’s restoration are part of the proceeds generated from the sale of property at Ceres Industrial Park for the Love’s Travel Stop that is currently under construction.

The supervisors, despite opposition from port commissioners, approved the port’s budget with the repair fund expense.

“Those assets they get the money from are owned by the board of supervisors,” County Administrator John Smith said at the time. “We’re the owners; they’re the managers. Traditionally, the lease revenue has gone to support the port’s operational cost. The board has the final say on the port’s budget. They have to go through the board for final dissolution on anything. We use those funds to fund them.”

While the county does have final say on expenditures, according to an opinion from the Mississippi Attorney General’s office, expenditures are supposed to be made after the recommendation of the port commission.

“It shall be the duty of such port commission, from time to time, to make recommendations to the board of supervisors of such county concerning expenditures to be made for the improvement, promotion, development, construction, maintenance and operation of the harbor and port facilities of such county, and shall annually submit to such board of supervisors a proposed budget for the operation and maintenance of such harbor and port facilities, which recommendations and budget shall be subject to approval of the board of supervisors,” the opinion reads.

The port commission did not recommend the $300,000 expense or the change in the budget. According to Vicksburg Warren Economic Development Partnership Executive Director Pablo Diaz, the budget submitted to the supervisors did not include the cost for the tank’s refurbishment.

The AG’s opinion also states “… it is the opinion of this office that a port commission has the authority to expend money from the port fund … The provision of utility infrastructure is an authorized function of the commission.”

The project, which was recently advertised to invite bids for the work, will refurbish the water tank that serves customers in the industrial park ahead of an inspection by the U.S. Environmental Protection Agency next summer. Currently, Culkin Water District provides the water to the customers in the park but does not own, or have the responsibility for, any of the tanks or lines in the park.

But, during the Aug. 20 meeting of the port commission, Warren County Board of Supervisors President Richard George said supervisors met with Culkin Water District officials and reached an agreement where Culkin would not be required to pay any part of the repairs.

According to minutes from the meeting, George said “Culkin had contacted the supervisors and that the supervisors met at Culkin’s request.” The port commission, Diaz confirmed, was not invited to that meeting.

The memo lays out a number of steps in paying for the needed repairs.

First, the memo states, “The county will immediately proceed with obtaining EDA or other funding, including emergency funding if necessary, for the purpose of refurbishing the elevated tanks.” At the time, officials were unable to get any grants to pay for the project.

Second, “the port commission and Culkin agree to cost share, to the extent possible for each entity and in accordance with applicable law, any costs of the elevated tank refurbishing not covered by grant funding.”

According to minutes from an Aug. 19 meeting of the Board of Supervisors, the day before meeting with the port commission, supervisors said the tank refurbishing was a “matter of urgency” and that the county “now has revenue at hand to proceed with a Memorandum of Understanding Agreement.” That agreement appears to have been one supervisors wanted to use instead of the one agreed to in 2014.

The new agreement supervisors mentioned during the meeting would have included participating parties “Stantec Engineering, Allen Scott with Engineering Services, Blake Teller, Board Attorney, Culkin Water District Office and Culkin Water Board and the Warren County Board of Supervisors.” The Warren County Port Commission was not listed as a participating party, even though legally it is the agency that manages county assets at the port and at the industrial park.

There was also no reference as to the meeting supervisors had with Culkin or the decision reached for the port commission to assume the full cost of the refurbishing.

But while that meeting was held, the port commission had been operating under the premise the 2014 agreement was still valid.

In a letter dated Aug. 12, Margaret Gilmer, chairwoman of the port commission, said it was “the clear expectation of the Warren County Port Commission in entering into the MOU was that any costs not funded by grants through the county will be shared equally between the port and Culkin, to the extent possible for each entity.”

Gilmer’s letter also cites a letter reportedly dated Aug. 5 by Teller “on behalf of the Board of Supervisors” that “requests that Culkin ‘participate in the cost [of the tank refurbishment] to the extent it deems reasonable and appropriate, up to 50 percent of the projected total cost.'”

Gilmer then writes, “The Port Commission interprets the MOU to require Culkin’s ‘reasonable and appropriate’ participation to be at the 50 percent level, which the Commission considers to be a fair and reasonable level of cost-sharing.”

In the Aug. 20 meeting, Gilmer asked George if Culkin, in the meeting supervisors had with the water district, was going to participate in the repairs. According to minutes from that meeting, George said “that he did not know.”

Also, in the 2014 agreement, “once elevated tank refurbishing … is completed, the county will take the necessary steps to transfer ownership of the elevated tanks and other water supply infrastructure from the county to Culkin and Culkin will accept such ownership.”

“We did our due diligence, investigated any grants that might be available, discussed it with the supervisors, and eventually attempted to reach an agreement with Culkin regarding how to cost-share the improvements in a way that was respectful to the spirit of the MOU (signed in 2014 by Culkin, the Port, and the County) and respectful to the taxpayers of Warren County,” Gilmer said.

She also disagreed with the premise by county leaders that the work was an emergency and needed to be done immediately.

“We managed the timing carefully so that this would not become an emergency, which it is not at the moment, given that we have until next summer before the inspection is due,” she said.

As for Culkin not taking part in any of the cost-sharing, Gilmer said it is the taxpayers who are carrying the full load of the repairs.

“At the end of the day, any dollars that Culkin does not bring to the table to cost-share on this project, are dollars that will be paid by the taxpayers of Warren County,” she said. “The Port Commission and the Board of Supervisors have never been at odds regarding the need and intent to take care of this issue. That being said, the Commission did reach out to Culkin to get an answer regarding how much they would contribute to the project, given that they are part of an MOU that specifies they would cost-share.”

Even though the port commission disagrees with the way in which the work was funded, the work will be done and there’s still time for the terms of the 2014 MOU to be met.

“The Commission recently approved for the work to begin on this project and solicitations for bids have already been published,” she said. “We are still in good timing to do the repairs and also in good timing for Culkin to respond to the commission’s request and cost-share in paying for the expenses, as the MOU says, to the extent of their ability.”