Harris has a unique view of art, and a vibrant vision for Vicksburg 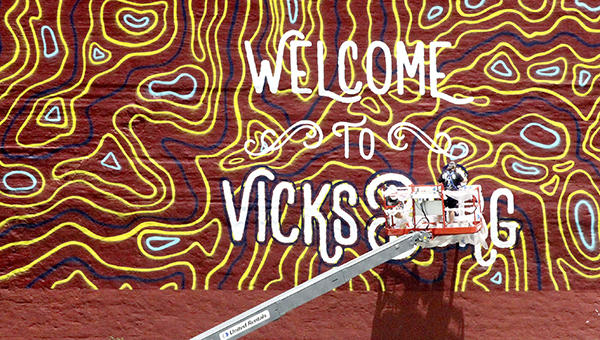 Drew Landon Harris sprays the finishing touches onto a mural on the side of 1107 Washington Street in June. Harris said the piece is inspired by the topography, such as hills, valleys and tributaries in the Vicksburg area. (Courtland Wells/The Vicksburg Post)

There was something about his drawings and other artwork as early as age 4 that led Drew Harris’ parents to encourage his talent. Through workshops and schools, his talent developed, leading him to pursue degrees in graphic design and fine art first at New Mexico State University and then later at Mississippi College.

Today, after completing his degree, working for a number of years in design studios in Denver, and managing H.C. Porter’s Gallery in downtown Vicksburg, Harris, a native of Albuquerque, New Mexico, is on his own. He’s working for commissions and laying out a vision he has for Vicksburg and the city’s art scene one large piece at a time.

While many around Vicksburg have known of his artwork, it was the completion of a large mural over the summer that put his name at the forefront of those seeking an artist’s eye on their projects.

Commissioned by Kelle Barfield, who owns a number of buildings in downtown Vicksburg as well as Lorelei Books, Harris went to work on a “welcome sign” to Vicksburg.

“We mostly wanted to do a piece that focused on the area, but was welcoming and was a centerpiece for downtown for all the visitors, as well as locals,” Harris said of his collaboration with Barfield. “When I started coming up with the designs, I came up with three different designs and that is the one we went with.”

The one they went with was a building-sized mural that covers the south-facing wall of a downtown building. The deep red background is highlighted with deep blue, yellow and teal lines that represent the rolling hills and interesting topography of the Vicksburg area. It is then topped with huge lettering saying, “Welcome to Vicksburg.”

“We worked with quite a few color schemes before settling on that scheme,” Harris said. “I think it was the contrast of the colors and we had fun. The dark red we choose was ‘Cherry Cola Red,’ and since the mural is right across the street from the Coca-Cola Museum, we felt that it would be fitting. And then of course, there’s teal in it.

“Teal has a special place in my heart,” he added. “I try to work teal into many of my pieces; I think maybe because of all the turquoise around in Albuquerque.”

In addition to the large “Welcome to Vicksburg” piece, Harris has added a few smaller murals to the row of murals completed in late spring on the City of Vicksburg’s parking garage at the intersection of Mulberry and Clay Streets.

With those projects behind him, he is setting his sights on other murals and walls that need attention.

“There’s a big movement in our community of not just doing original art on our buildings, but bringing back murals that were ghosted. There are just so many in downtown alone that have faded away, or what we call ghosted,” Harris said. “We want to bring life to those. It’s just a matter of connecting with the person who owns the property and getting those rolling. There’s at least a dozen murals in downtown that could be cleaned up a bit.”

“We have this beautiful wall, we have a mural artist in town, let’s make ends meet. There are a lot of great blank canvases here,” he said.

As for the actual painting, Harris said it doesn’t matter the size of the project, but rather the time he enjoys and finds therapeutic.

“Very much like a zen feeling that you get lost and time disappears. I could do it for 12 hours straight and not notice the wear and tear on your body,” he said. “I just want to keep going and going and going. It’s just a drive.”

For more information on Harris and his artwork, you can visit his website drewlandon.com.

The Vicksburg Orchestral Society has brought their love of…