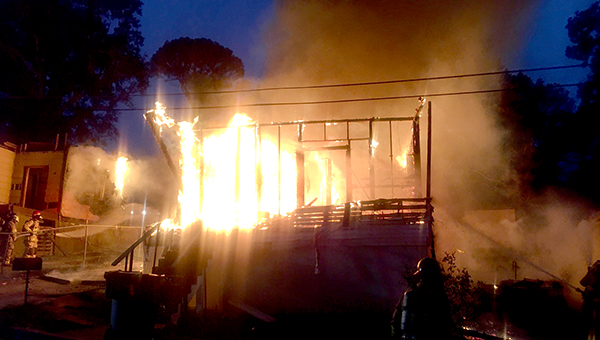 Units with the Vicksburg Fire Department respond to a house fire at 903 Wabash Ave. Sunday morning.

Officials with the Vicksburg Fire Department believe an unattended candle was the cause of a fire that destroyed a Wabash Avenue home Sunday morning.

Just before 6:30 a.m., units were dispatched to 903 Wabash for a fully-involved fire. Vicksburg Fire Chief Craig Danczyk said the home was completely destroyed, but units were able to save other homes nearby.

“The heat from the fire was so intense that two neighboring homes did suffer damage,” Danczyk said. “One of the neighboring homes was already slated for demolition, but another home did sustain damage to its vinyl siding.”

During the initial call, Danczyk said there was a thought someone might have been in the home at the time of the fire. But those on the scene quickly determined that no one was in the home. It was also reported that there were no utilities going to the home.

When talking with the home’s owner, Danczyk said the owner reported he could have left an insect candle burning in the home when he left.

“The unfortunate thing about early morning fires, they usually do not get noticed or reported until they are really bad. Everyone is usually still in bed,” Danczyk said. “That was the case here.”