Supper on the ‘Sip grows dramatically in its second year 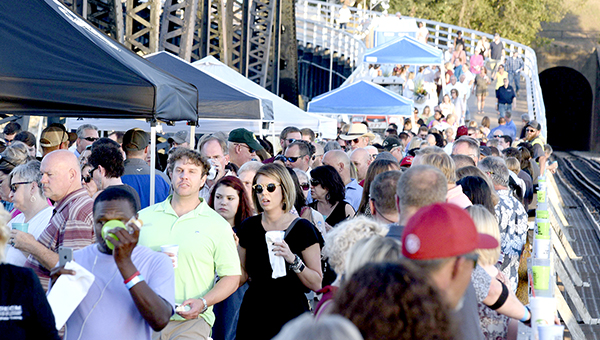 People gather during the 2019 Supper on the Sip on the Old Mississippi River Bridge. (Courtland Wells/The Vicksburg Post)

“As simple as this may sound to some, it was a seven-month journey filled with hard work, determination, creativity, fear, faith and love,” Michele Connelly, executive director of the United Way, said. “It was absolutely unbelievable. It was a brief moment in time to once again show others how we rally around each other to continue strengthening the community we call home.”

During the evening, those who attended were treated to food and drinks from 22 vendors and were part of a group of more than 1,000 strong.

In addition to the food vendors, 16 of the United Way’s partner agencies were on hand sharing information of how they serve Vicksburg and Warren County. Those agencies represented will receive a portion of the more than $38,000 raised by the event.

“We had 20 amazingly talented restaurants lining the bridge, sharing a taste of their favorite menu items along with two beverage sponsors.  I encourage our community to frequent these restaurants, as they have proven to be community team builders over and over again,” Connelly said.

She said the event, which grew in the number of vendors and the number of tickets sold from the first year to the second, was organized and coordinated by those she called “community heroes.”

“For years, Ali Hopson and Lori Burke have served on United Way Boards, Cabinets and multiple committees because they understand the importance of the United Way as it relates to our community. Having them lead the charge for this ground-breaking community event was inspirational to all who followed,” she said. “Dr. Jill Pierce and Susan Upshaw coordinated a very large group of individuals who made it their mission to recruit our amazing restaurants.

“Once a restaurant committed to the event, Paul and Donna Ingram worked with the owners to ensure a great experience for all.”

Connelly said Supper on the ‘Sip, which has joined the list of community events to utilize the Old Mississippi River Bridge as a backdrop, was also successful due to the help of those with the Warren County Bridge Commission.

“I would be remiss if I did not express my gratitude for the support we received from the commission, Herman Smith [Bridge Superintendent] and his staff,” she said. “Throughout the entire journey, Herman walked beside the committee to ensure we met the guidelines of the commission while adding suggestions and man power that strengthened the event.

“The pride these men feel for the bridge was definitely apparent to all who were involved in the journey to this amazing night for the second year in a row.”

For more information on the United Way of West Central Mississippi, its partner agencies and the ways they help and support those in the region, call 601-636-1733.