Accident in busy intersection turns out to have a silver lining 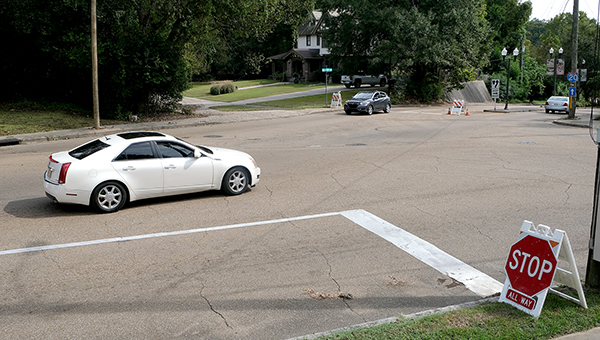 Who would have thought an 18-wheeler clipping power lines and tearing down traffic signals at an intersection would have been a good thing?

For residents in the area around the intersection of Halls Ferry and Cherry Street that is exactly what might have happened.

On Oct. 2, an 18-wheeler traveling north on Halls Ferry, just as it merges with Cherry Street, caused havoc, as the trailer caught power lines and ripped them down along with nearby traffic signals.

Since then, that intersection, which brings together Halls Ferry, Cherry and Harris Street together, has seen better traffic flow and no incidents, Traffic Department Supervisor W.L. Sanders said.

“The funny thing is, had that accident not happened, it probably would still have a traffic stop,” Sanders said. “But, since then, we have seen the flow of traffic improve.”

Sanders said prior to that accident, he and others with the city, including the mayor’s office and the police department, had discussed making that intersection an all-way stop. During those meetings, he was in favor of keeping it a traffic light.

In fact, he said, one of those meetings took place the day before the accident took place.

“People in the neighborhood had already said they wanted that intersection to be an all-way stop,” he said.

As it turns out, the intersection had been part of a previous traffic study commissioned by the city, and had, according to Sanders, been identified as a section that needed a traffic light, “but just barely.”

“The change is going to be fine, and has been fine,” he said. “I think 90 percent of the traveling public is going to like the change.”