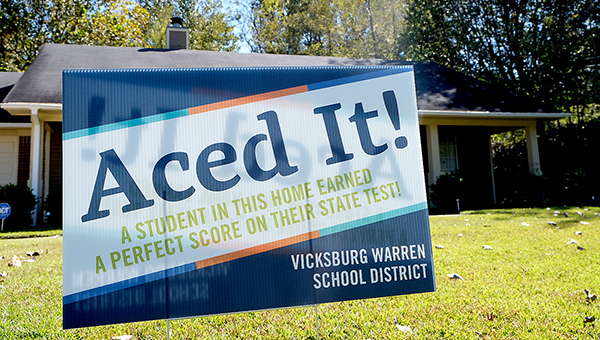 An “Aced It!” sign appears in the front yard of a Warrenton Elementary School student who achieved a perfect score in state-mandated testing conducted last spring. A total of 160 signs were placed throughout the county Thursday. (Courtland Wells/The Vicksburg Post)

During a season when yard signs supporting a particular candidate are the norm, there were a few more placed Thursday that celebrate an accomplishment anyone could celebrate, regardless of political affiliation.

After classes began Thursday at schools throughout the Vicksburg Warren School District, teachers and administrators from schools started to fan out across the community, placing signs in yards of those students who received a perfect score in last spring’s Mississippi Academic Assessment Program testing.

The signs, with the words “Aced It!” celebrated that a child — or children — in that home accomplished a perfect score in one or more of the topics tested. Topics included English Language Arts, math, algebra I and English II. In some cases, some homes had more than one child who had perfect scores in more than one topic.

“There are some homes where they will have four signs in their yard when they get home,” district spokesperson Christi Kilroy said. “This is something truly worth celebrating.”

In all, the district reported 160 perfect scores on the tests, which are taken by students in grades 3 through 12. The only school zone that did not have students represented were Dana Road Elementary School and Sherman Avenue, which only serve students in grades kindergarten through second grade.

“This is a big deal and something we wanted to make a big deal for those students and their families,” Kilroy said. “You really want to celebrate something when they do so well.”

City officials are looking at two potential sites to relocate Vicksburg’s animal shelter. The Board of Mayor and Aldermen has... read more