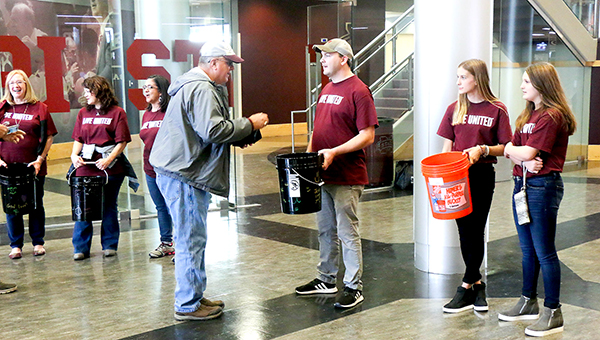 The historic, months-long flood that ravaged homes, wildlife and farms affected Ole Miss and Mississippi State fans alike. Those who are fans of LSU, Southern Miss and more were also impacted.

But Sunday evening, everyone in the south Delta was applauding Mississippi State.

Through a partnership with State’s men’s basketball program, the United Way of West Central Mississippi was invited to accept donations during the Bulldogs’ exhibition basketball game Sunday against South Alabama.

“As a graduate of Mississippi State University, it was an honor to be a part of such an amazing event,” United Way of West Central Mississippi Executive Director Michele Connelly said. “Seeing young adults and their families actively advocate and support those affected by the floodwaters was very memorable”

A total of $2,967.78 was raised for flood victims in the area. That total will be added to the tens of thousands already raised and distributed to victims of the flood.

Of that, $93,874 has been distributed, with funds being given for food, lodging assistance, clean up and long-term recovery.

The United Way, through its website, provides updates on the amount raised and distributed. It also provides a link to those wishing to make donations to the recovery effort.