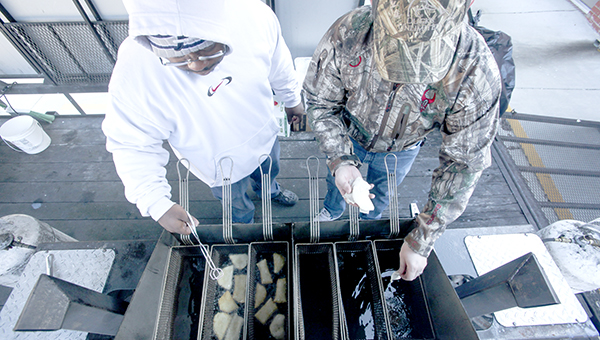 Beignets are cooked up during last November’s Young Professional’s Beignet Breakfast. This year’s event will be held Thursday at Washington Street Park. Proceeds from the event go to support the United Way of West Central Mississippi. (Courtland Wells/The Vicksburg Post)

The Vicksburg Young Professionals will be at it again.

Thursday, from 7 to 10 a.m., the group will hold their third annual Beignet Breakfast, which is a fundraiser for the United Way of West Central Mississippi.

Vicksburg Young Professional president Tyler McNeal said beignets are made on sight and this year the fundraiser will be held downtown.

In the two previous years, the Beignet Breakfast was held at the Vicksburg Warren Chamber of Commerce building on Mission 66, but this year it will be at the Washington Street Park, located at the corner of Jackson and Washington streets.

“Now that the park has been finished, we thought it would be fun to hold it downtown,” McNeal said.

Before moving to Vicksburg, McNeal said, he participated in the Meridian’s Young Professional group, and they held a beignet breakfast.

“It was a fun interactive fundraiser,” he said.

And while the recipe for the beignets is considered a “secret young professional mixture that cannot be revealed,” he said they are easy to make.

In addition to the group’s members, McNeal said, they also have several sponsors who help donate goods, including Divine Donuts.

“They (Divine Donuts) are very helpful and provide us some products. Gary Thomas with Goldie’s Express allows us to use his fryers, and Foam Packaging supplies our to-go-plates,” McNeal said.

On average, the group sells between 150 to 200 dozen beignets, with proceeds from the event going to support the United Way of West Central Mississippi.

Participating in the beignet breakfast is a way to give back to the community, McNeal said, and it is also a great way for young professionals to network.

McNeal encourages everyone to come by and get some beignets.

For those making orders of 10 dozen or more, delivery service will be available. Pre-orders can also be made.

Forms are available by calling 601-636-1733 or emailing kami@unitedwayvicksburg.org.