Vicksburg-based animal rescue caring for dog that was shot twice 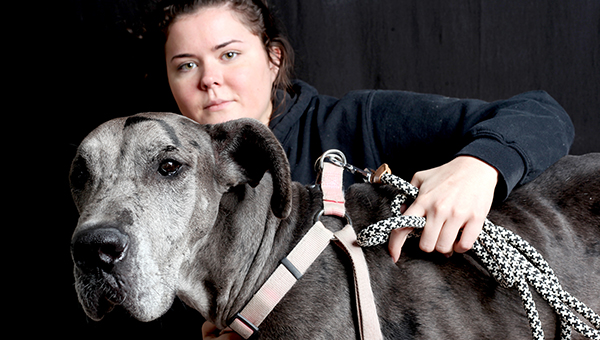 Alexa Jeffers, a co-founder of the animal rescue 'Helping Animals Reach Tomorrow,' is pictured with Riley, a 2-year-old Great Dane who was shot by its previous owner. (Tim Reeves/The Vicksburg Post)

Roughly eight months ago, an individual in Lafayette, La., was tired of what was then a puppy getting into his trash. Instead of taking the dog to a shelter, or finding another home for the rambunctious puppy, he shot the dog — twice — in the head.

The gruesome act was witnessed by this man’s neighbor, who took the Great Dane to the vet for immediate treatment.

Thankfully, through quick and quality care, the dog survived.

But, the wounds were severe and one bullet remains lodged behind the dog’s left eye, leaving her blind in the left eye and partially in the right.

“She’s so loving, so protective of me,” H.A.R.T.’s co-founder Alexa Jeffers said. “She’s so worried about me leaving her somewhere.”

H.A.R.T., which stands for Helping Animals Reach Tomorrow, was the creation of Alexa and her mother, Cappy, when Alexa was 12 years old. Today, at 20, Alexa is continuing the work with her partner Bethany Johnson. Their focus is on fostering animals, and working to get dogs and cats spayed and neutered to control overpopulation.

“We started out giving dogs on chains free fences up to 20×20 and dog houses to make sure they had shelter, but when I took it back over recently, we offer a lot of low-cost spay and neuter,” Alexa said. “We sometimes still do the fences, but we are mainly focused on spay and neuter because overpopulation is such a problem in the South, especially with all of the backyard breeding.”

As for Riley, Alexa said the work now is getting her back closer to her weight after being so malnourished and getting her ready to be adopted.

“It’s going to be so hard (to let her go), not just because I am attached to her, but she is one of those dogs who is super attached to me,” Alexa said. “This is not just some dog that will go out and immediately thrive, she will have to grieve my loss as much as I am going to grieve losing her.”

Riley might move into a new home sooner rather than later.

Alexa said through her rescue, she was able to connect with a family in Arkansas that was looking for a Great Dane.

“There’s a family that had a Great Dane-bonded brother and sister pair, and the sister unexpectedly died that left the brother grieving,” she said. “So, they were looking for him to have someone to help him grieve less. I took Riley to the dog park to meet them and the two of them got along really well, so hopefully, if everything goes right, she’ll move up there.”

Through an appeal on social media, the rescue was asking for donations to cover some of the costs for Riley’s care, and the care of other animals.

“Currently, I have 11 foster dogs; 9 pit bull puppies, Riley and a Shephard mix puppy. Any donations would help offset the vet bills and plus, we have a lot of other animals that are in need of vet care all the time. Plus, we have a long list of animals that need to be fixed,” Jeffers said.

H.A.R.T. is not yet considered a non-profit, so donations made to the rescue are not tax-deductible.

For Alexa, the care for animals is something she believes was instilled in her by her mother and grandmother.

“My mom and my grandma instilled in me this love for animals when I was younger,” she said. “We would always move bugs off of the sidewalk and things like that.

And as for letting Riley go after just a week of being together, “she is hopefully going to a good home, so I cannot be selfish and keep her as much as I want to.

For more information on H.A.R.T., visit its Facebook page by searching “HART-(Helping Animals Reach Tomorrow).” Donations to the rescue can be made through the Paypal link on the Facebook page.