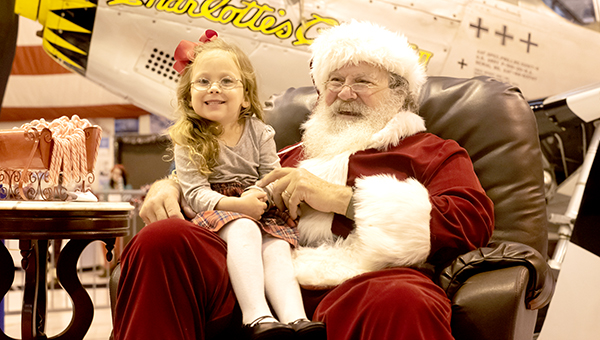 Teagan Lehman poses for a photo with Santa during the 2018 Southern Heritage Air Foundation's Pajamas, Pancakes and Planes Breakfast With Santa at the Vicksburg-Tallulah Regional Airport. (Courtland Wells/The Vicksburg Post)

If you don’t have a ticket to the Southern Heritage Air Foundation’s annual Pajamas, Pancakes and Planes on Saturday, Dec. 7, sorry, it sold out.

In just its seventh year, the event, which has two seatings with room for more than 250 at each seating, sold out in just 16 hours.

“We just don’t think it can get any bigger,” Foundation Executive Director Patty Mekus said. “I think the popularity of the event has come from the cost of it, the activities that we have throughout each seating and the fun everyone has while here.”

In addition to the pancakes and the events, those attending either seating this year will have the chance to purchase chances in a drawing. In the drawing, door prizes will be awarded, but proceeds from the drawing will be divided between the Foundation and St. Jude Children’s Research Hospital.

“Every year the tickets have gone quicker and quicker,” Mekus said. “There is so much to do and people really look forward to meeting Santa and seeing which plane we have serving as Santa’s backdrop.”

This year, Mekus said, one of the Foundation’s warbirds, the newly-acquired Russian Yak, will serve as the backdrop.

And, if you would like tickets to the 2020 Pajamas, Pancakes and Planes, go ahead and mark your calendar now for November. There’s no telling how fast the tickets will go next year.