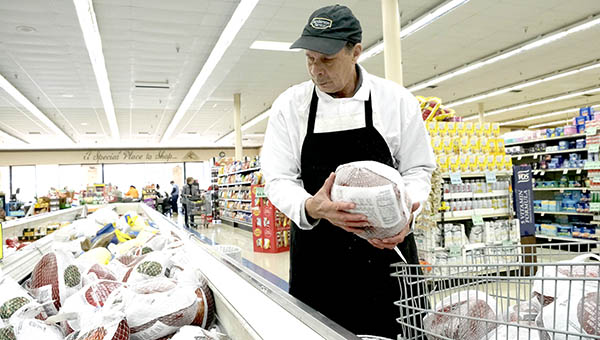 This week, many stories will focus around Black Friday sales, Small Business Saturday and the retail rush that hits full speed after Thanksgiving. But, for local grocers, the weeks and days leading up to Thanksgiving are by far the busiest time of the year.

“I tell people all the time it’s game time. I sometimes will stay awake thinking about making sure everything is ready for these days,” said Corner Market Store Director Marus Tucker.

Tucker said leading up to the two weeks before Thanksgiving, he will look at last year’s sales down to the inventory of items to make sure he is prepared for even the smallest customer need.

“If someone comes in at the last moment and needs something and we do not have it, then we have put them in a bind,” Tucker said. “If we don’t have it, then they have to worry about going somewhere else to find it. That’s our customer and I want to make sure we have what they need when they need it.”

While the traditional Thanksgiving items like turkeys are on most everyone’s list, Tucker, along with Cynthia Morgan of Morgan’s Piggly Wiggly, said it is the little things they stock up on leading up to Thanksgiving.

“We make sure to stock up on things like celery, bell pepper, onions and cornmeal for cornbread,” Morgan said.

As for the last-minute needs for those who rush in on Thanksgiving Day, Morgan said items like butter and seasonings are at the top of the list.

“We even lay out a few turkeys to thaw on the days leading up to Thanksgiving because there is always a few people who didn’t expect to be cooking on Thanksgiving, or those who need a little bit more, who come in needing a turkey at the last minute,” Morgan, whose family has been in the grocery business for 30 years, said.

Tucker said while buying trends have been consistent since he started in the grocery business 16 years ago, there have been some changes.

“More people are frying their turkeys these days, so I have to make sure to stock more peanut oil this time of year,” he said. “We have also seen more people cooking fish and frying fish for Thanksgiving.”

And while hams are being added to more and more tables on Thanksgiving, turkey remains at the top of the list.

“We sell a lot, a lot of turkeys,” Tucker said. According to Tucker, Corner Market will sell around 2,500 turkeys over the two weeks leading up to Thanksgiving Day.