Hundreds turn out for start of Christmas in the Park 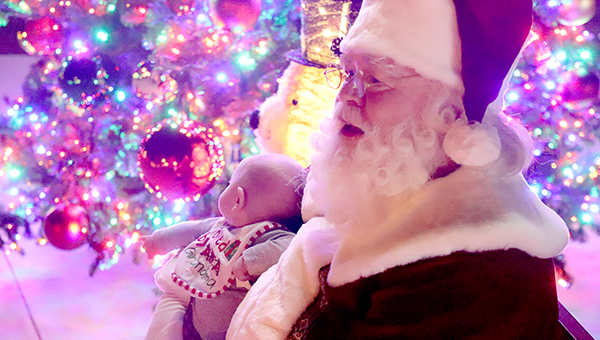 Santa Claus poses for a picture with a small guest during the start of the 2019 Christmas in the Park. (Larry Walker/Submitted)

Hundreds turned out Friday evening for the start of the inaugural Christmas in the Park in downtown Vicksburg.

“It was amazing. People showed up to support it,” Vicksburg Main Street board member Debbie Haworth said. “Everybody was so positive and they were thanking us for doing it and so happy Vicksburg has this.”

The idea to hold Christmas in the Park was comprised of both Vicksburg Main Street and Billy Sheffield.

Sheffield had wanted to see a special Christmas event held downtown, Vicksburg Main Street executive director Kim Hopkins said, and after two years of tossing the idea around it came to fruition Friday.

“I think it was a very nice event and attraction for Vicksburg,” Vicksburg Main Street board member Walter Osborne said.

“It was something new and I think it was well-received,” he said.

Osborne said he thought the event, which included a tree lighting, a carousel and trolley rides, was a great way to kick off the holiday season.

While there were several attractions offered during the event, Osborne said, he could not say which one was the favorite.

“I can say, I noticed the trolley and the carousel had long lines. The benches were full of children as Mrs. Claus was reading stories to the children and there was a line waiting to talk to Santa Claus,” Osborne said, adding the event reminded him of when he was a child at Christmas. “We used to run to the Koestler Bakery to see the Santa and the sleigh on Clay Street and this was kind of like that.”

Haworth said the crowds remained late into the evening until the park was closed for the night.

Crowds returned Saturday, Haworth said, with some folks there for a second night of fun.

Christmas in the Park, located at the Washington Street Park, 1099 Washington St. will continue through Dec. 21.

School groups, daycares and tour groups are welcome to schedule field trips from 9 a.m. to 1 p.m. Thursdays and Fridays.

Christmas in the Park is sponsored by Vicksburg Main Street, Billy Sheffield, Sheffield Carriage Company, the city of Vicksburg and the Vicksburg Convention and Visitors Bureau.

“I hope people continue to come down and experience Christmas in the Park,” Osborne said.