Claiborne County could soon be home to new energy facility 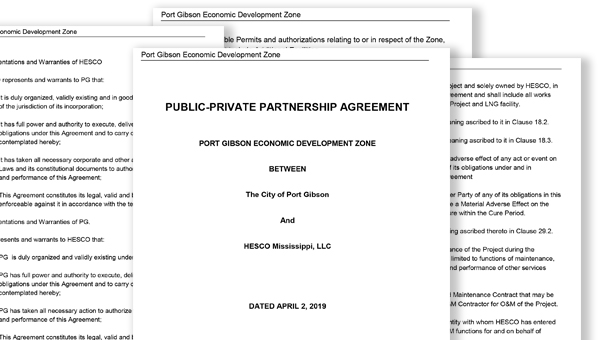 PORT GIBSON — If reports become reality, Claiborne County could be home to a new, $1 billion liquified natural gas facility in as soon as two years.

In what has been a developing partnership since late last year, Houston Engineering Services is reportedly planning to build a new facility in the southwest corner of Claiborne County on the Mississippi River.

However, some state economic development officials are skeptical about the validity of the project.

“[Mississippi Development Authority] did meet with representatives from HESCO Energy either late last year or early this year to talk about this proposed project,” MDA spokesperson Melissa Scallan said. “In April, MDA requested information that is required in order to put together an incentive package, such as financial records, proof of financing, a business plan and any formal contracts related to the project. To date, we have not received any of this information or had any further contact with anyone from HESCO.”

HESCO CEO Monte Burton, who was in Port Gibson Thursday for a town hall meeting to discuss the project with city and community leaders, said the facility would be the company’s first.

“This will be our first facility, but we have been in the energy business for a number of years,” Burton said Friday.

Once operational, Burton said the facility would employ a “few hundred” employees and produce 3.5 million gallons of liquid natural gas per day.

In all, the company is looking to acquire more than 6,000 acres.

Some reports have placed the number of jobs tied to the project in excess of 25,000. Both Chambliss and Burton said that is not the case.

Those figures are projections of what they believe could be if other companies decide to locate in the federation Opportunity Zone, which covers the southern third of Claiborne County.

The site HESCO has targeted for its project is in the Opportunity Zone.

Opportunity Zones, like the one established in Claiborne County and others, like one in Warren County, were created as part of the federal government’s Tax Cuts and Jobs Act to encourage investment and economic development in undercapitalized communities.

Being located in an Opportunity Zone might also explain why HESCO did not seek any incentives or tax abatements from Claiborne County or the state of Mississippi through the Mississippi Development Authority.

Chambliss said the company did meet with MDA late last year but ultimately decided not to seek state assistance.

As for not seeking abatements or incentives from the state, Burton simply said, “we didn’t need to.”

In April, HESCO and the city of Port Gibson held an event where Burton and Port Gibson Mayor Fred Reeves signed a public/private agreement that forms the Port Gibson Economic Development Zone, which will manage the property where the facility would be located.

Reeves said Friday the deal will spark an “economic renaissance” in Port Gibson.

“We need it in southwest Mississippi. My job is to try and grow this economy. Start out at 100-150 and go from there, if we can get 1,000 here, I would be happy,” Reeves said. “This will be great for all of southwest Mississippi, all the way from Vicksburg to the state line.”

Reeves said while there might be those who are skeptical of the project’s validity, he is not one of those.

As for the millions of gallons of liquified natural gas produced daily, Burton said much of the product would have domestic uses and customers. He said the company plans for most of the finished product to be shipped along the Mississippi River by barge.

At the time of that April ceremony, construction was expected to begin within two months.

Friday, Burton said he expected the company to break ground on construction in the first quarter of 2020, with the construction project lasting 18-to-24 months.