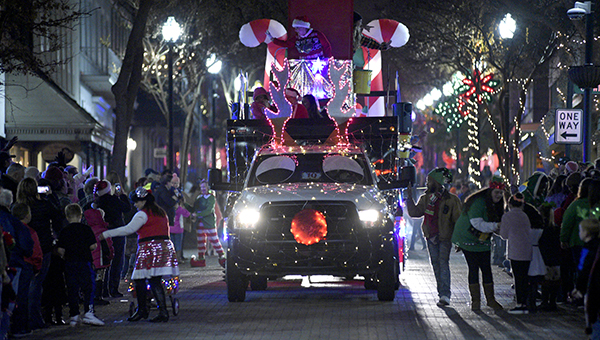 While the estimates on the number of those attending Saturday evening’s annual Christmas Parade in downtown Vicksburg are not yet in, Mayor George Flaggs Jr.’s view of the parade was immediate.

“This may be the biggest and best parade we have had,” Flaggs said Saturday. “There were surely more people than I have ever seen. Well done, Vicksburg.

“Vicksburg is having a merry, merry Christmas.”

Leading the parade as Grand Marshal was Bill Seratt, who retired in July as director of the Vicksburg Convention and Visitors Bureau after 12 years.

What followed Flaggs, who was among the first in the parade, and Seratt, was a nearly hour-long procession of bands, classic cars, floats and even a bit of snow.

The Best in Show award went to Danny Hearn Trucking, while Best in Business honors went to Keller Williams Realty.

Most Original went to Vicksburg Cable, with the Most Enthusiastic award going to the entry put together by employees of the City of Vicksburg.