Fight at riverfront leads to arrest, search for car in water 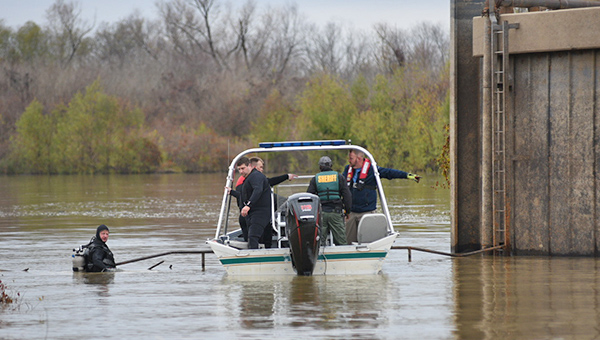 Vicksburg Fire Department divers and a boat team from the Warren County Sheriff’s Office search for a submerged vehicle in the Yazoo Diversion Canal on Friday afternoon. The car, believed to be unoccupied, rolled into the water early Friday morning. (Courtland Wells/The Vicksburg Post)

An altercation at the Vicksburg riverfront around 2:15 a.m. Friday led to the arrest of one man and the loss of a vehicle in the Yazoo Diversion Canal.

Grady Bishop, of Vicksburg, has been charged with simple assault and giving false information to authorities.

According to Capt. Mike Bryant of the Vicksburg Police Department, officers responded to a disturbance call at the waterfront, where they found Bishop standing over an unidentified woman.

A third individual reportedly jumped out of a gold 2003 Toyota Camry and left the scene. The car, which was unoccupied, then rolled back into the canal.

The woman was treated at the scene by emergency medical personnel. Bishop, who was transported to Madison, also has a hold on him by the Mississippi Department of Corrections on previous convictions.

After an hours-long search, dive teams with the Vicksburg Fire Department, along with the help of a boat team from the Warren County Sheriff’s Office, located the car in about 40 feet of water.

Divers were able to connect a cable to the car, which was then pulled out of the water by a large tow truck.

Emergency officials early Friday morning decided to wait to pull the car out of the canal later in the day since the car was unoccupied and there was no immediate emergency. The search for the car by divers was done in 50-degree water with zero visibility.