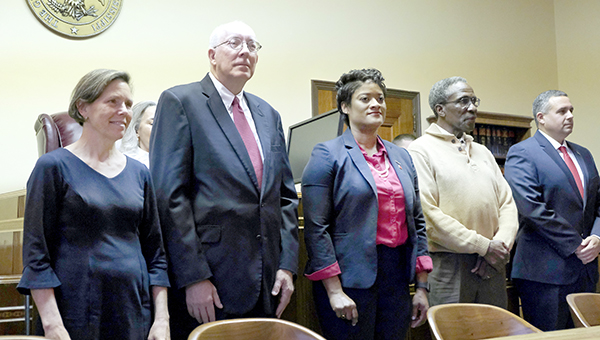 In a room filled with friends, family and other supporters, 15 officials were sworn in to public offices during a brisk ceremony Tuesday at the Warren County Courthouse.

Under the direction of Chancery Court Judge Vicki Roach Barnes, individuals elected or re-elected to county-wide offices took their oaths of office.

“It was very meaningful to me because the courtroom was full of people who supported me in the campaign, who actually encouraged me to run to begin with,” said Kelle Barfield, who was sworn in as District 5’s representative on the Warren County Board of Supervisors. “My son, Waid, held my dad’s Bible for me so that is special. My father would have been such a supporter of this and to have his presence in the courtroom was special as well.”

With the exception of four of the five supervisor positions, each of the others sworn in Tuesday were those re-elected to office.

Ben Luckett took the oath of office in his return to the Warren County Tax Assessor’s office, with Anonia Flaggs Jones returning to the Tax Collector’s office.

Doug Huskey was sworn in for another term as Warren County Coroner, as both Edwin Woods Jr. and Jeffrey Crevitt were sworn in in their return as Justice Court judges.

Troy Kimble, Glenn McKay and John Heggins were also sworn in for another term as Warren County constables.

But, it was the supervisors who saw the largest turnover in November’s general election, and thus the number of officials taking the oath of office for the first time, many with members of their family taking part.

“Throughout this whole process, she was my biggest cheerleader,” District 1 Supervisor Ed Herring said of his 7-year-old daughter, Adelyn, who held the Bible during his swearing-in. “She was there at the polls during the primaries; she was at the polls during the general election; a real trooper from daylight to dark. I’m sure this is a special day for her.”

Herring said that Tuesday’s ceremony was also a time to reflect on the campaign and election.

“I will take away from all of this the process, not only meeting the people, learning the positions but the process, how it all ties together,” he said. “People just see elected officials. They really don’t know how they get there.”

Shawn Jackson, who was elected District 3 Supervisor, had among the largest contingent of family helping in her swearing-in.

“It meant a lot,” Jackson said of her three sons, Kai, Jace and Taj, holding the Bible as she recited the oath of office. “They’ve been there every step. With me every step along the way. It’s a good closure and I would not have wanted to get sworn in without them. These are the guys who ate pizza all summer when I was out campaigning and couldn’t cook.”

Jackson said the ceremony was special in how she was able to have recently-departed loved ones be a part of the swearing-in.

“My grandmother missed this moment by a few months so we were proud to do it using the family Bible she got from her aunt,” Jackson said. “It was good to have them with me.”

Newly-elected District 4 Supervisor Jeff Holland said although he has been a part of a number of swearing-in ceremonies, and given oaths before, Tuesday was different.

“I have been sworn in multiple times in my life for other jobs in federal government service. This was more poignant. It was more about the … real focal point about serving the community, a community that has been really good to you for a very long time,” Holland said. “The other ones were similar words, but this one had a different meaning. It really did.”

Holland also said Tuesday’s ceremony was a first for his wife, Janet.

“(Janet) has never been part of any of my swearing-ins. She might have seen them, but she never stood with the bible and been part of the process,” he said. “So that part of it was really special.”

District 2 Supervisor William Banks, the only returning member of the Warren County Board of Supervisors, was also sworn in during Tuesday’s ceremony.

Although the swearing-in ceremony was held Tuesday, the new supervisors will not officially take office until Jan. 1.

During Monday’s meeting, the current Warren County Board of Supervisors unanimously approved a measure that would allow the outgoing supervisors to leave office Dec. 31, turning their seats over to the incoming supervisors.

Had that order not been approved, the new supervisors would not have been officially installed into office until their first meeting on Monday, Jan. 6.

In that meeting, Monday, Hardy said the move would allow for an easier transition for payroll and insurance. It was also a move that was suggested and approved by the state auditor’s office.