Christmas in the Park trolley repaired, back in service 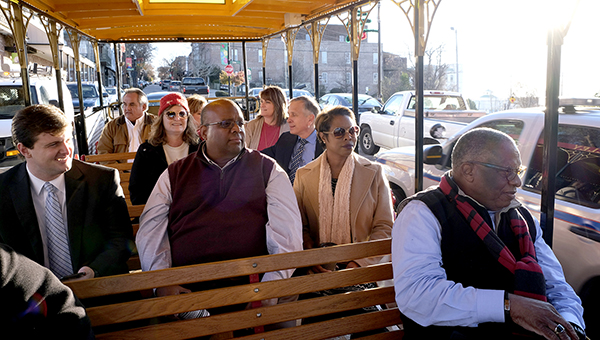 The Christmas in the Park Trolley, provided by Sheffield Rentals, goes for a loop around downtown Thursday. Among those riding the trolley were officials with the city of Vicksburg and Main Street. (Courtland Wells/The Vicksburg Post)

Less than a week after it broke loose from the tractor that was pulling it, the Christmas in the Park trolley is back in service.

Filled with officials from the city of Vicksburg and Main Street, the repaired trolley took its normal loop through part of downtown Vicksburg before parking at Washington Street Park.

“I felt it was important that we showed everyone that the trolley was fixed, it was safe,” Mayor George Flaggs Jr., who was among those who rode the trolley Thursday, said.

Saturday, at around 8:20 p.m., the tongue of the trailer snapped in the 1200 block of Washington Street with riders on it.

After breaking away from the tractor, the trolley rolled down Washington Street until it ran into a curb in the same block.

Traffic was blocked at the corners of China and Washington Streets while police officers responded to the scene.

All passengers got off the trolley and no injuries were reported.