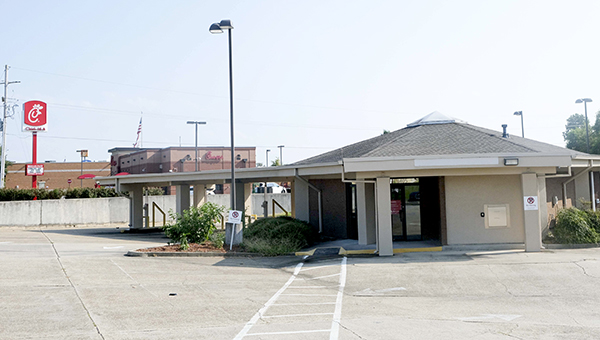 A site plan filed with the city of Vicksburg showed this property at 3405 Halls Ferry Road could become the site of a new Starbucks. (Courtland Wells/The Vicksburg Post)

As the calendar prepares to roll over to a new year and a new decade, one of the most shared stories on social media this year continues to brew.

In September, The Post reported permits had been applied for and filed for demolition of the former Regions Bank building on Halls Ferry Road. The demolition was to make way for a Starbucks location in Vicksburg.

As of Friday, Community Development Director Jeff Richardson said those permits remain filled out and filed, but have yet to be picked up and paid for.

While long-rumored, the first official word of Starbucks locating in Vicksburg came from Mayor George Flaggs Jr. during a public meeting on Sept. 5 to review the city’s 2020 fiscal budget.

In that review, Flaggs said the project is expected to be an $800,000 investment in Vicksburg.

Local economic development officials have continued to decline the invitation to make comments on the proposed project.

According to public records, a site plan was submitted to the city’s community development office earlier in the year, showing a Starbucks located at 3405 Halls Ferry Road, which is the former Regions Bank branch next to Chick-fil-A.

The site plan was designed and submitted by LeCraw Engineering, out of Duluth, Ga. On LeCraw’s website, they list Starbucks as a “high profile, repeat client.”

In The Post’s original report, Richardson said he was unaware of a timeline for demolition and construction of the Starbucks location but did confirm permits filed by Bradford Building, out of Birmingham, were in place for work on the exterior and the interior of the building.

On the site plan, the building’s approximate size would be 2,200 square feet.