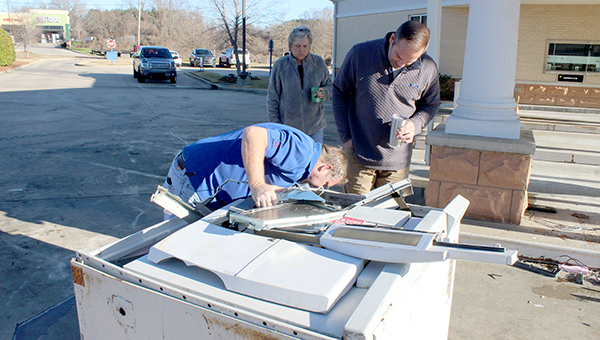 All Mutual Credit Union President Michael Mathews could do Tuesday morning was watch as a technician and police investigators looked over what was once an operating ATM machine at the credit union’s branch on Clay Street.

At around 4:50 a.m. Tuesday a number of suspects reportedly stole a forklift from the nearby construction site at the Vicksburg YMCA, drove it to the credit union and attempted to lift the ATM from its base and place it in a waiting UHaul truck.

According to early reports, the suspects fled the scene once they were unable to lift the ATM into the truck and once police were en route.

Mathews said investigators have reviewed security video and “have everything they need.”

Police have not confirmed yet the number of suspects involved or any identifying information.

Mathews said the only bank operation affected by the attempted grand larceny was the bank’s drive-thru service, which was reopened before 9 a.m.