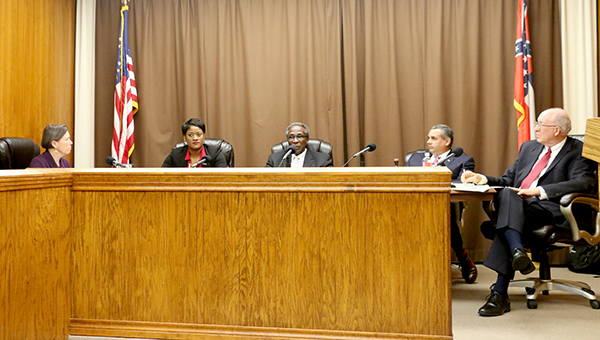 A proposed pay increase for the Warren County Board of Supervisors and some other county personnel has been delayed following a meeting Monday.

Instead of voting for or against a 3 percent pay increase that was provided by the Legislature last spring, a majority of the board voted to table the decision to allow for more discussion and to review any impacts on the county’s budget.

But for District 2 Supervisor William Banks, the lone returning member of the board, the fight for a salary increase for supervisors is one that has gone on for some time, and he blamed coverage previewing Monday’s meeting as a reason why the four new members of the board decided to delay a decision.

“I think the [The Vicksburg Post] intimidated these people from voting on this salary increase,” Banks said of the other supervisors during the discussion. “The [Mississippi Association of Supervisors] fought hard to get the Legislature to provide this increase. Supervisors have not had an increase since 2004. So it is my idea that the MAS has been wasting their time for this group of people.”

Banks doubled down on his criticism of coverage and of the decision following the meeting.

“This was supposed to have taken effect in January. This had been approved last year. No one ever questioned the chancery clerk increase, never questioned anyone else’s increase. But this board got intimidated by what y’all wrote in the newspaper that we were going to vote on increases,” Banks said. “No matter when you take it, it’s going to be the same thing.”

The legislation approved last spring did provide for a number of salary increases for county and state personnel, but it was the supervisor increase that required a vote by supervisors.

Once the initial motion for a vote failed to receive a second, District 3 Supervisor Shawn Jackson moved to delay the salary increase decision to a later meeting. That motion was then seconded by District 5 Supervisor Kelle Barfield.

“I will just offer that it is the aspect of the timing is what troubled me as much as anything. I haven’t been able to adequately assess the impact on the budget or for that matter the impact of salaries of other county employees because I know there are some tied to this,” Barfield said. “I just wanted to have more thoughtful deliberation on the subject.”

Jackson said she could see both sides of the debate on whether or not to take the raise or delay the decision, but said ultimately her decision was based on finding a balance.

“I agree with both Supervisor Banks and Supervisor Barfield,” Jackson said. “I do believe MAS has worked tirelessly, and believe in the power of the vote that our constituency has faith in us and a less than $2,000 increase isn’t going to rock the boat. However, my commitment is to ensure that with every increase in salary that there is a balance in the budget, and that even if it takes one working session to get to the bottom of it that’s what I am most comfortable with.”

If approved, the increase would move the supervisors’ annual salary to $46,041.

When a vote to delay the measure until later was called, Banks provided the lone dissenting vote.