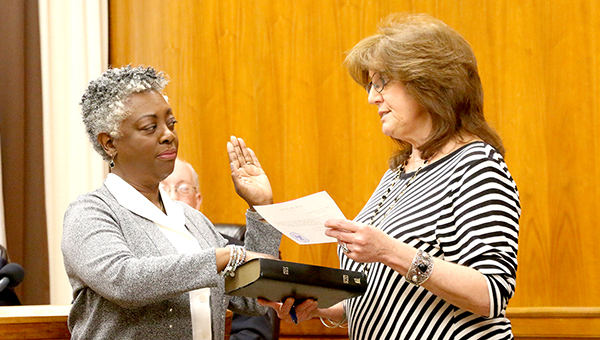 Loretta Brantley, left, is given the oath of office Monday by Warren County Chancery Clerk Donna Hardy moments after being appointed interim county administrator by the Warren County Board of Supervisors. (Terri Cowart Frazier/The Vicksburg Post)

The Warren County Board of Supervisors had a long list of items to take care of Monday during their first meeting of their four-year term, beginning with the appointment of county administrator.

Left vacant by the December retirement of John Smith, who had served in the role for nearly two decades, the supervisors had three options; appoint a new administrator, leave the position vacant or name an interim.

They went with the latter by choosing someone who brought not only the needed qualifications for the job but the experience.

During one of their first acts as a board Monday, supervisors unanimously approved the appointment of longtime county employee and current county comptroller Loretta Brantley to serve as county administrator in the interim.

The appointment was historic as Brantley becomes the first woman to hold that appointment — either on a full-time or interim basis.

“I feel really honored. I am very happy and honored. I know it is a big responsibility and I am going to need help from all of our supervisors and county employees, but I am up to the challenge,” Brantley said following Monday’s meeting. “I am going to do my very best.”

District 4 Supervisor Jeff Holland, who during the meeting was elected president of the board, said Brantley was the perfect choice for the county, and for the supervisors.

“She is the interim administrator and she’ll do a fabulous job, there’s no question that is true,” Holland said. “I am hopeful she will want to vie for the job permanently.”

Holland said the supervisors have plans for a “complete search” but did not announce as to when or how that search will be conducted.

“I really appreciate the board of supervisors in the confidence they have shown in me,” said Brantley, who worked closely with Smith in her role as comptroller. “It is a big responsibility and I don’t know everything, but I am willing to learn.”

In addition to Brantley’s appointment and Holland’s election as president, the board elected District 3 Supervisor Shawn Jackson as vice president. They also unanimously reappointed Blake Teller as county attorney and Larry Flowers as county road manager.

Terri Cowart Frazier, a staff writer for The Vicksburg Post, contributed to this story.