Crabtree felt God’s calling to educate ‘next generation of leaders’ 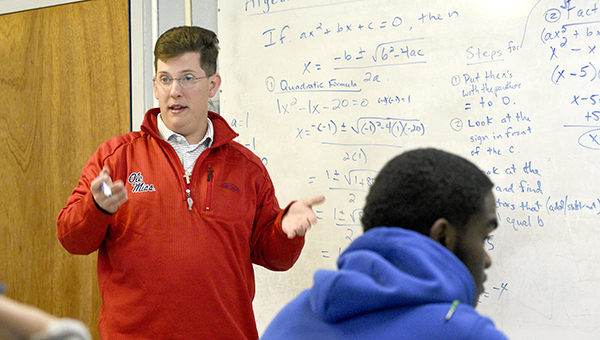 This article is part of a series by The Vicksburg Post, in partnership with the Vicksburg-Warren County Chamber of Commerce, featuring each of the Teacher of the Year nominees.

“God called me to impact the next generation of leaders,” Crabtree said.

Crabtree is one of the area teachers nominated for the Vicksburg-Warren County Chamber of Commerce’s Teacher of the Year awards.

Crabtree, who is a graduate of Porter’s Chapel, received a bachelor of science mathematics with a minor in music from Mississippi College and a master’s of education degree from Liberty University.

Today, he is not only a mathematics teacher, but is also the school’s music director and an administrative assistant at the school.

In just his second year of teaching at Porter’s Chapel, Crabtree said his age provides him the chance to better connect to his students through the use of today’s technology.

“My students and I both are of the generations that think social media rules the world,” Crabtree said in his application to the chamber. “In order to help incorporate real-world learning, my students and I post our successes in the classroom on Instagram and Twitter. We use the hashtag #takingflight.

“I encourage my students by allowing them the opportunity to make it on social media, and if they notice someone doing well in class or in life, they can use the hashtag to help incorporate the taking flight initiative that our school has adopted.”

Crabtree believes the adoption of both technology and social media in his teaching allows him to “meet students where they are.”

“Geobra allows students to create 2D and 3D figures at their fingertips,” Crabtree said. “I assign projects, and we use this program to help collaborate and better understand 2D and 3D concepts in Geometry I.”

In addition to teaching, Crabtree is involved in a number of musical organizations and guilds, including the American Guild of Organists, Vicksburg Chamber Choir, Mississippi Baptist Singing Churchmen and more. He serves as an organist at First Baptist Church Vicksburg where he is also a member.

In addition to following what he believes was God’s calling to go into teaching, Crabtree believes his faith is something that helps him be a better educator.

“I believe that every student should have an opportunity to know and love Jesus,” Crabtree said. “So, my philosophy of teaching is that, through a well-rounded Christian education, students and teachers should always strive to be more like Jesus.