Amborn’s joy of teaching remains after more than 40 years 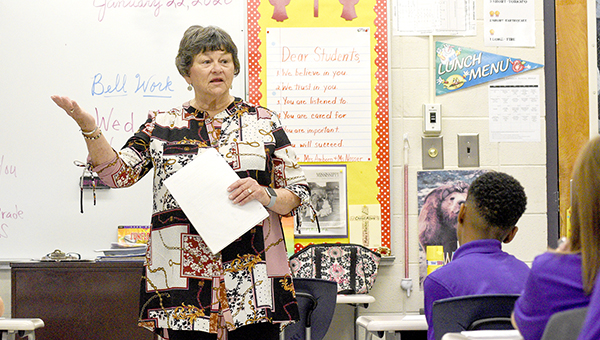 In an interview with The Vicksburg Post in 2015, St. Francis teacher Martha Amborn said the reason she had remained in teaching so long was simple; the children.

“I do it for the children,” she said. “Seeing them grow from the beginning of the year to the end of the year is fun to watch. You see them grow in a lot of different ways, not just academically, but spiritually and mentally.”

Amborn is one of the area teachers nominated for the Vicksburg-Warren County Chamber of Commerce’s Teacher of the Year awards.

This school year marks Amborn’s 43rd year teaching and its the little things that make the experience so rewarding.

“When a struggling student came running up to me, giving me a big hug and saying ‘Mrs. Amborn, we did it! I passed my test! Thank you,'” Amborn recalled. “This child never gave up.”

Originally from the Delta, Amborn married into a family with a rich history of tradition at St. Aloysius and St. Francis.

“My husband (Charlie Amborn) graduated from St. Al, and my three children (Abigayle, Amanda and Charlie) went to St. Francis and St. Al,” she said in her 2015 interview with The Post. “It’s been a big family for a long time.”

Prior to teaching at St. Francis, Amborn taught sixth grade at Redwood Elementary from 1969 to 1973.

She taught second grade at St. Francis beginning in 1980 before moving to fourth grade in 1991.

During her previous interview, Amborn said sometimes a student will walk in and she will know exactly who their parents are.

“When you start teaching the children of your former students, you know you’ve been here a long time,” she said. “It’s wonderful, but it’s just hard to imagine.”