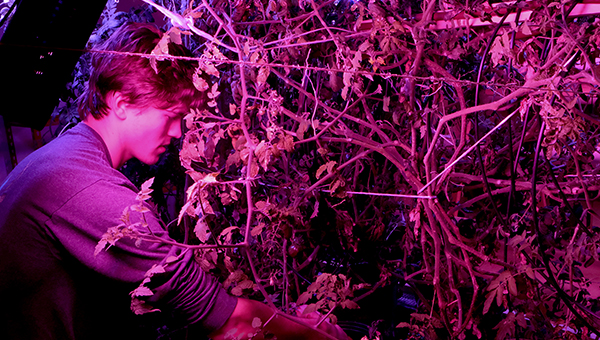 A student at Warren Central inspects tomatoes growing in the aquaponics lab Thursday. The program, which is part of the school’s Health and Human Services Academy, uses aquaponics to grow lettuce, tomatoes and other vegetables. (Courtland Wells/The Vicksburg Post)

For those who enjoy gardening, there is just something about the feel of the dirt between your fingers, the planting of seeds and the routine watering to give those fruits and vegetables the best chances of success.

But two programs within the Vicksburg Warren School District, one at Warren Central High School and another at Vicksburg High School, are taking gardening to an entirely different level.

At Vicksburg, students within the school’s Communications, Arts and Business Academy are using a system called hydroponics to grow lettuce, cabbage, mustard greens and collard greens.

At Warren Central, students within the school’s Health and Human Services Academy are using a system called aquaponics to grow lettuce and tomatoes.

And if you think the programs are just to grow food, there is a lesson and goal behind each.

“We wanted to do something worthwhile that would result in us giving back to the school. In whatever we did, we wanted it to be maintainable and repeatable. And it was the students who came up with these ideas,  the only way to make it work and keep it happening was to tie it academically to a subject,” said Steve Summers, Warren Central’s Health and Human Services lead teacher. “So we began looking at the different subjects offered and what we came up with was botany, the study of plants, and grouped botany with environmental sciences. So if you look at those objectives the running of a garden can literally meet all of those objectives.”

Summers said while there are academic objectives, there is also a goal the students have set for the program.

“The idea of where we want to get to is that we want to take produce off of our cafeteria’s ordering inventory,” He said. “The students don’t want them to have to outsource product anymore.”

In fact, Isaiah Kirkley, a student at Warren Central who has already completed botany but still comes to the lab to help, said the program was able to meet part of that goal earlier this year.

The aquaponics system at Warren Central is a closed system, where water is reused over and over again.

In this setup, the roots of the plants are placed in a maze of PVC pipes, where water, containing nutrients, moves over the roots. The pipe system is used for plants such as lettuce, while buckets containing pebbles support the growth of tomato plants.

As for the tomatoes, their roots are contained in the bucket with the pebbles and a drip system over the plants provides water and nutrients.

In this system, the students add the nutrients to the water and check them routinely to make any necessary adjustments.

At Vicksburg, which is its second year of the program, the students, teachers and administrators developed the hydroponics system that incorporates live fish into the mix.

With Vicksburg’s hydroponics system, the roots of the plants are placed carefully in large baths that circulate water. The nutrients in the water, that go to feed and support the growth of the plants, come from two large circulating tanks that contain tilapia. The water from the tank first passes through a large container of pebbles and then moves along to the tables where the plants are placed.  It is the waste and nutrients put off by the fish that feed the plants.

In return, the roots clean and filter the water to a level good enough to circulate back into the fish tanks.

Each day, students feed the fish and check the chemical and nutrient levels of the water.

Many of the students in the Vicksburg program were there at the beginning.

“I really enjoyed starting this program, helping start it off from nothing,” Vicksburg sophomore Jannifer Banks said. “Now we get to watch everything grow.

While their goals of providing quality, organic vegetables to each of their cafeterias is the same, Vicksburg has one difference.

“Once the fish get big enough, we will be able to harvest them too,” Vicksburg senior Trevion Scott said. “They have to be plate-sized before we can do that. We also want to be able to supply the vegetables to the culinary arts class.”

Vicksburg teacher Alicia Cruthirds said the program switched from catfish in year one to tilapia in year two.

“We went through about 300 catfish last year. They all died,” Cruthirds said. “So, over the summer we learned at training that tilapia are better for what we are wanting to do here.”

Moore said in addition to growing the vegetables from scratch, they nearly grow the fish from scratch.

“We got them when they were fingerlings and have them grow in some other tanks,” Moore said. “Then, when they were bigger, we would move them over to the larger tanks.”

Neither of the programs came without a cost or a need for space.

For Warren Central, the aquaponics lab takes up a classroom, complete with its water system, pumps and a number of intense black lights that take the place of natural sunlight. Summers said the start-up cost for the program was an estimated $7,000.

In Vicksburg’s case, the hydroponics lab also takes up a full classroom, one that needed to be refurbished before any growing began.

Cruthirds said work was needed on the room’s electrical system, in addition to cosmetic work. In all, school officials estimate $10,000 was spent starting the program.

And the programs have each faced challenges — both problems caused by them, and those not in their control.

For Warren Central, which, like Vicksburg High, is going through massive renovations, the power went out in the lab over Christmas break. As a result, no water circulated and no lights turned on.

“We lost just about all of our lettuce when that happened,” Jason York, who teaches the botany class, said.

As for Vicksburg, something happened to the air conditioning system that feeds the room, leaving the room without air circulating.

“We lost everything,” Cruthirds said. “What we have learned is that this lab is an ecosystem and that if something goes wrong — even those out of our control — then it’s going to have an effect. So, we’re starting over.”

In the end, the teachers and administrators are quick to point out both programs are led by the students and their ideas.

“When we first started talking about a garden, we were going to put an actual garden on our land, however, construction took place. So we had to think of other ways to accomplish our goals,” Welch said. “Hats off to these teachers, these students, it would not be what it is today without them.”