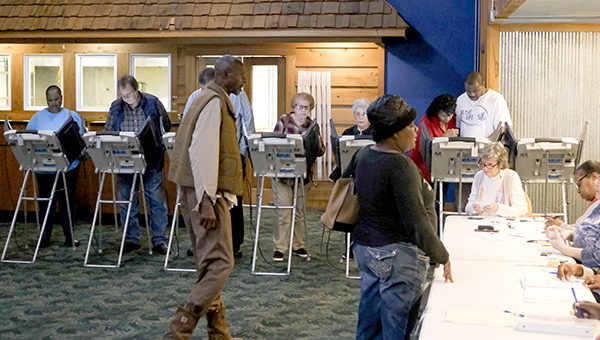 The facility that was once home to the Tree House Banquet Hall is on the market and has, according to one realtor website, been on the market for more than 560 days.

But it is not the fact the facility is on the market that is of concern to members of the Warren County Election Commission and District 3 Supervisor Shawn Jackson. The concern is that they cannot get in touch with the owners and the status of the building as a polling location for the upcoming presidential party primary in March is uncertain.

During Monday’s work session of the Warren County Board of Supervisors, Jackson shared that the election commission and others have not been able to reach owners of the property and that they recently were made aware of their absentee ownership when a letter to them by the commission was returned.

Now, Jackson, who is working with the election commission, is scrambling to find a suitable location to welcome voters when polls open for the party primaries on March 10.

“Both Election Commissioner [Elva] Smith and I have attempted to reach a number of people in connection with that facility. It has been impossible to this date to get in touch with anyone,” Jackson said. “The previous agreement to use that facility was with an administrator with the Tree House, not with the owner. The administrator is no longer working with the ownership group has no way to access the building.

The Tree House had been the host of the Cherry Street voting precinct, which is among the largest voting precincts with more than 2,500 registered voters assigned to it.

She said she was part of a meeting with Jackson Wednesday to discuss the need to move the precinct but was waiting for the supervisors to make a decision.

“It is our hope they make a decision soon so we can begin notifying voters of the change,” Dionne said.

In the work session, Jackson said there were two possible locations, and she was communicating with the owner of her preferred location of the two about the details.

“If we make a change, it would not be a temporary change given we want to complete the entire election calendar this year,” Jackson said.

In an article published in April 2019, the owner of Tree House LLC was listed as Eric Lawson, who at the time had to work with city leaders to increase security at the facility following an incident where shots were fired during an April 6 party. No one was injured.

In that agreement with the city, Lawson agreed to install a metal detector at the building at 1837 Cherry St., which at the time was rented out for private parties, receptions, banquets and reunions.

According to a real estate website, the location is for sale for $275,000.