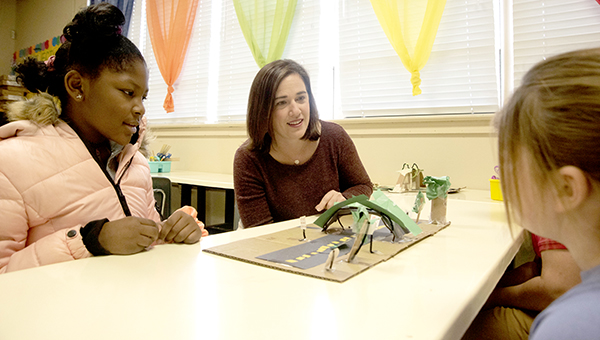 Hern wants her students to be excited about school and learning

For Marion Margaret Hern, a science, technology, engineering and mathematics (STEM) teacher at Bovina Elementary, the day is often spent working projects with groups of students or developing ways to incorporate the elements of STEM into everyday learning.

But for Hern, who also helps in literacy intervention, it was the interaction with a struggling student, and the student’s ultimate success she considered the most moving moment of her career.

“One of the students struggles academically and has emotional issues due to a major life-changing event that occurred in his family,” Hern said. “I started pulling him during lunch and reading with him while we ate lunch. This has helped the student read his library books, meet his Accelerated Reader goals, and has provided him an opportunity to gain trust in me as his teacher.

“This one-on-one attention has helped this student build trust in me while helping him heal emotionally. This trusting relationship is helping him grow academically and emotionally even though I have not experienced his type of grief.”

Hern is one of the teachers nominated for the Vicksburg-Warren County Chamber of Commerce’s Teacher of the Year awards.

This year marks Hern’s 14th year teaching, and her second as a teacher at Bovina Elementary.

She also received her National Board Certification in 2008.

In her application to the chamber, Hern outlined a number of teaching practices and philosophies, but they all boiled down to a very simple belief.

“My belief about teaching is all students can learn,” she wrote. “I want to see all students excited about school and learning.”