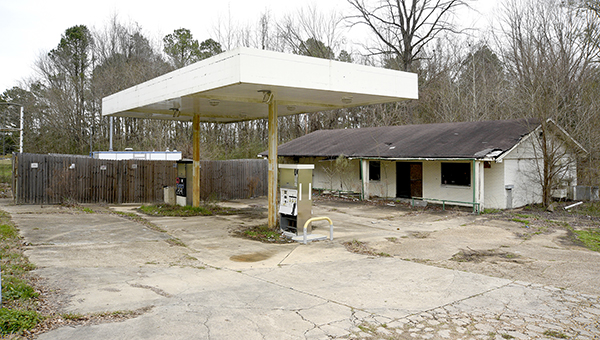 This property of this former convenience stor Oak Ridge Road is owned by the state of Mississippi and has been called an eyesore by many of the residents who live nearby. (Courtland Wells/The Vicksburg Post)

A disagreement that started last week during a work session of the Warren County Board of Supervisors spilled over to Monday’s regular session when one member of the board strongly disagreed with a move to possibly use county resources to clean up an eyesore.

District 2 Supervisor William Banks disagreed with a move by District 1 Supervisor Ed Herring to go through the process of getting state approval to demolish a decrepit property located on state-owned property on Oak Ridge Road.

During last Monday’s work session, Herring said he had been working through the Secretary of State’s office and the Department of Environmental Quality to clean up the site of a former convenience store that had fallen into state ownership and disrepair.

Residents in the area had long decried the condition of the property, calling it an eyesore.

Banks said a move by the board to spend county resources — whether that would be paying for the demolition or using county crews — would establish a precedent that would lead to requests from residents to have similar eyesores demolished and cleaned up by the county.

Herring said he was not yet advocating for the site to be cleared but first wanted to get permission to demolish the site if it came to that.

District 4 Supervisor and Board President Dr. Jeff Holland understood Banks’ concerns and believes the state should be given every opportunity “to shine” by cleaning up the site themselves before the county makes any decision on cleaning it up at its expense.

Herring said once the property was claimed by the state due to failure to pay property taxes by previous owners, it worked to first remediate what was discovered to be fuel in the surrounding soil.

The state contracted with PPM Consultants to effectively burn off the fuel from the soil over the past few years. Herring said the state has since reported that work has been completed and they are now moving forward with plans to remove the underground fuel storage tanks.

In the discussion in last week’s work session, Herring countered Banks’ objection saying the county, in working with the state, had an opportunity to clean up an area of blight.

“I cannot answer for what was done or not done by previous supervisors,” Herring told Banks. “But, what I can say is that we have the opportunity to clean up an eyesore and it is something we should consider.”

After the lengthy discussion Monday, Banks cast the lone vote against sending the letter to the state.

In other board action, Supervisors approved a measure that moved one of the polling places in District 3 from the former Tree House event space to Serene Event Hall, located at 2000 Drummond Street.

District 3 Supervisor Shawn Jackson said the move was made necessary by the fact that the Tree House location is on the market and county election officials have not been able to contact its owners.

During Monday’s Board of Supervisors meeting, the new location was approved. Circuit Clerk Jan Daigre said her office would begin preparing cards for voters affected by the change of voting location ahead of the March 10 Presidential Party Primaries.

A months-long process to find the most effective — and cost-effective — way to dispose of more than 200,000 cubic feet of debris from the Eagle Lake community was finalized Monday when supervisors awarded a bid to Preferred Clean Out Service of Nesbit.

The debris in the Eagle Lake community is from 24 flood-damaged homes that were demolished by the volunteer organization Team Rubicon. In their agreement with the county, Team Rubicon agreed to demolish the homes at no cost, while the county was responsible for removing the debris.

In November, the previous board had discussed a plan that would have placed dumpsters in the area to allow county work crews to pick up the debris from the rights of way and place it in the dumpsters. A company would then haul the dumpsters to the landfill. Each dumpster can hold 30 cubic yards of debris.

That plan initially was thought to have cost nearly $180,000.

At the time, supervisors approved the county’s purchasing office to request bids for the dumpster service.

When those bids came back, the low bid by Vicksburg Warren County Landfill lowered the expected overall cost to $130,000.

Instead of awarding the bids, the previous supervisors took the bids under advisement and left the final decision to the new board which took office in January.

After they had taken office, the new board sought bids of a lump sum contract that would require a company to both remove the debris from the rights of way and dispose of it themselves.

It was that contract that was awarded Monday.

County Purchasing Agent Tonga Vinson said the company expected work to begin in about two weeks and that they are expected to have the debris cleaned up and disposed of well before the end of February.

Other decisions by the supervisors:

• Approved and authorized the board president to sign interlocal agreements with nine counties who routinely house juveniles in the Warren County Juvenile Detention Center.

Warren County Judge Marcie Southerland had approached supervisors during their recent work session about the agreements.

She said counties would be charged $125 per day per child housed in the center and that the county reserved the right to turn away any child from any county for any reason. She also told supervisors juveniles from Warren County would take priority over those from any of the other counties.

The practice of accepting children had been going on for a number of years with no contract in place. Southerland told supervisors, who agreed, that having a contract in place was best for all involved.

• Supervisors approved the hiring of a new director for the county’s building and grounds department to fill the spot left vacant by Chuck Thornton’s retirement in December. Interim County Administrator Loretta Brantley did not disclose the individual’s name during the meeting but told supervisors the individual would first need to work out a two-week notice with their current employer.

• Supervisors approved the observance of George Washington’s birthday on Monday, Feb. 17 as a day off for county employees. County offices will reopen Tuesday, Feb. 18.