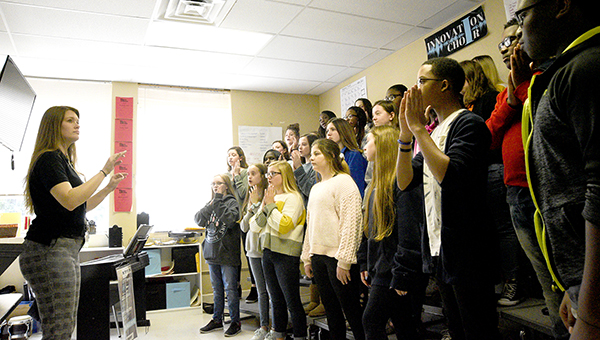 Academy of Innovation choir director Katherine Hoitt conducts the students who are set to travel to Nashville, Tenn. in early March to perform at the Leader in Me Symposium at Vanderbilt University. (Courtland Wells/The Vicksburg Post)

During the Leader In Me Symposium in March 2019, officials with the Franklin Covey program announced the Academy of Innovation had been named among the first middle schools in the region to achieve Lighthouse status.

Thirty members of the school’s choir program will perform a full concert at the start of the symposium on March 5.

The choir program’s director, Katherine Hoitt, said the choir was invited to participate by symposium officials in December.

“It’s so cool,” Hoitt said of the invitation and upcoming trip. “I was surprised when they wanted us to live stream our performance last year. Then to be able to showcase the talent of the kids in a full performance was when I really got excited; to be able to program things and showcase what the kids have been working on all year, just one or two songs.”

The group traveling includes two specific groups in the overall choir program; one is the Academy Chorale, which Hoitt said is the group made up of advanced 8th-grade girls and the other is Southern Synergy, a pop acapella group.

Hoitt, who is in the midst of her second year with the school, said students will travel to Nashville on March 4. The trip to Nashville will also include a stop at Indian Springs School near Birmingham, Ala. for an exchange performance with that school’s choir program.

“We will get to sing for them and they will sing for us,” Hoitt said. “And the kids will have the chance to learn from each other.”

Once the choir arrives in Nashville, they will have a rehearsal at the symposium site before staying overnight near Nashville.

For AnneMarie Jeffers, an 8th-grade member of the choir, she and her fellow choir members were stunned to get the opportunity.

“The reaction throughout the group was pretty much mutual. We were both stunned and excited that we get to go on this trip and have this opportunity,” Jeffers said. “I’m looking forward to performing with this group. I love performing and I look forward to sharing this experience with this group.”

Shayne Thompson, also an 8th-grade student, said the idea of performing at the symposium is a bit nerve-wracking.

“We’re nervous to do it, but we are going to do it,” Thompson said. “I’m looking forward to visiting the other school, singing in front of students and schools we’ve never seen before,”

The Nashville symposium is one of 13 symposiums organized by Franklin Covey in the U.S. in March.

According to the website for the symposiums, the events provide “informative sessions on impactful education topics” and give educators the opportunity to “share innovative ideas with other administrators, superintendents, directors, principals and teachers.”