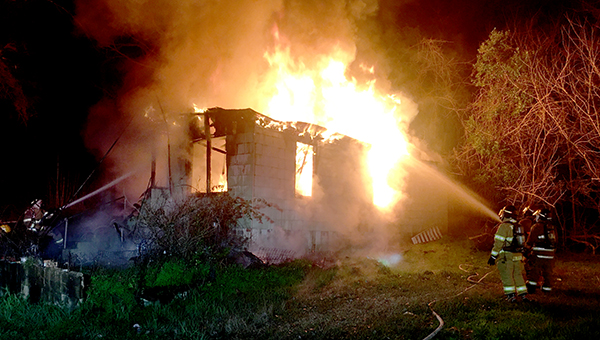 A small, unoccupied home on Valley Street was completely destroyed in a fire early Friday.

Multiple units from the Vicksburg Fire Department responded to the fire in the 2900 block of Valley Street just before 5 a.m.

According to Vicksburg Fire Chief Craig Danczyk, the 911 call came in at 4:49 a.m. from police officers who were in the area.

When fire units responded, they reported flames were showing from the home.

“Nobody was at the property when we arrived. We did get a little information from a neighbor,” Danczyk said, adding the previous owner of the home was deceased and it was reportedly visited at times by members of the family. There was no information, he said, as to when someone was last at the home.

“It is going to be a total loss. We do not know if the property owners had insurance,” Danczyk said. “The investigation will have to bring out some specific information like the cause, when was the last time someone was there, what items were running in the house.

“The house did have electricity so it is possible something was running,” he said. “Hopefully, the investigation will give us those clues, facts to the cause.”

Danczyk said when he arrived on the scene, crews were actively fighting the fire. When he left at around 6 a.m., firefighters were still working to extinguish hot spots.

None of the neighboring homes were threatened or damaged.