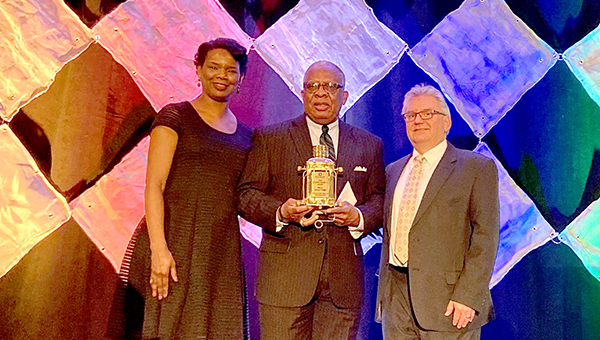 The award is intended to honor an elected official whose support or influence greatly enhances the tourism industry in the Southeast.

In a press release announcing the award, one of the tourism highlights Flaggs was credited with leading include the opening of the Sports Force Parks on the Mississippi, which reported more than 135,000 visits in less than a year of operation in 2019.

“Enhancing tourism is one of the fastest ways to grow an economy — especially Vicksburg’s,” Flaggs said. “I believe one of my most important responsibilities as mayor is to support tourism in any way I can. Receiving this award is a credit to the hard work of so many in our community who know how important it is to work together to leave Vicksburg better than we found it.”

Flaggs’ leadership, the release said, has been instrumental as an advocate for the opening of the Old Mississippi River Bridge to pedestrian traffic. In 2019, the city of Vicksburg was the first to pass a resolution supporting the opening of the bridge for use as a pedestrian walkway, which would result in a significant economic impact for the entire State of Mississippi.

The city of Vicksburg also invested in the development of Washington Street Park, which hosts the Vicksburg Farmers’ Market and Second Saturday and which also included sponsoring the Bill Ferris Mississippi Blues Trail Marker, dedicated in downtown Vicksburg in May as the 245th marker in Mississippi.

“Mayor Flaggs understands the return on investment for tourism and understands that it’s pivotal to our city’s growth,” said Vicksburg Convention and Visitors Bureau Executive Director Laura Beth Strickland. “He continues to be an advocate for tourism and is well-deserving of this high recognition. His work stood out among the 13 states and the District of Columbia. This is proof that Vicksburg is moving in the right direction.”