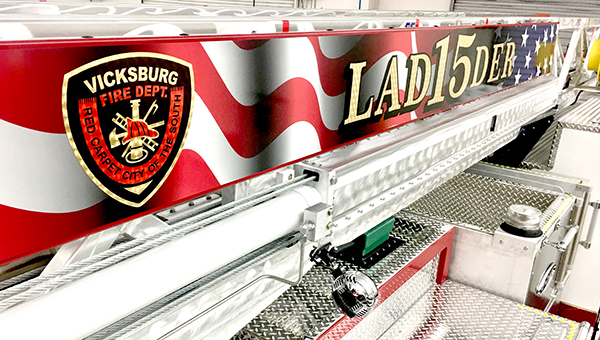 The Vicksburg Fire Department is adding to its fleet of vehicles and its capabilities.

Officials with the department are in Daytona, Fla. going through the final inspection of the department’s “Ladder 15,” which should be in service in Vicksburg by the end of the month.

Vicksburg Fire Chief Craig Danczyk said the new truck will be placed at Fire Station No. 5, located at the airport on U.S. 61 South, which will provide expanded service to residents in south Vicksburg.

“This will benefit industries in south Vicksburg, such as Batesville Casket, Eaton Industries, Foam Packaging and others on the 61 South corridor, and back up other large buildings and commercial structures citywide, including the harbor project,” he said.

He also added the truck will allow the department to “run three aerial units 24-hours-a-day, 7-days-a-week.”

The truck, a 78-foot E-ONE “Typhoon” aerial, can accommodate up to five firefighters.

“Ninety percent of the time the truck will respond as a pumper,” Danczyk said.

“We purchased Ladder 3 in 2017 and it was instrumental in lowering our Fire Protection Rating from a Class 5 to a Class 4,” Danczyk said. “I believe this apparatus will be beneficial in assisting the department and the city in lowing our fire rating to a Class 3. This will reduce insurance costs for everyone.”